What I can write about is why I love living in southern Germany. I belong here. My soul is completely at rest and at home. I'm filled with gratitude during the simple act of walking to the local butcher or going for a stroll around our 1250-year-old village on a cool summer night (I'm waiting longingly for one of those again!). I wonder sometimes what on earth I ever did to deserve this.

So I've decided to start a series that will explain what I love about living here in the Schwabenland and why I won't ever leave, at least not by choice. The list is long and new reasons pop into my head almost every day. Perhaps this will explain why I am not eager to return to Wisconsin but hoping friends and family will consider planning their next trips to visit me and see this beautiful place.

Where do I begin? How about with the lovely little towns nearby? These towns have been here for hundreds and hundreds of years. Many saw damage from fires that wiped out entire sections of town in the Middle Ages and from bombings in WWII but were rebuilt painstakingly to their former glory, at least in the Altstadt.
The closest many Americans get to Europe is EPCOT at Disney World, but here the half-timbering is real and the houses and churches are hundreds of years older than the United States. 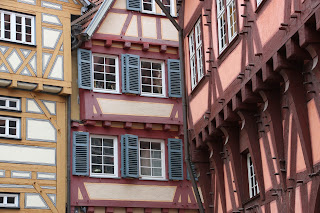 The market squares have served for many generations as gathering places and produce and livestock markets, and the cobblestones - which are still repaired as needed by brick masons - were laid for carts and carriages rather than for cars.

Except for the plastic garbage bins, parked cars, and fashion styles of passers-by, you can walk along streets and alleyways of the Altstadt not just imaging, but seeing what the town looked like in the Middle Ages. Luckily we don't get to smell what it was like on hot summer days back then, when people seldom bathed and chamber pots were emptied out of upper windows onto the streets. 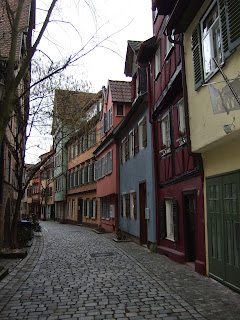 Esslingen and Tübingen are my two favorite towns in the area, and they are so rich with history, intriguing secrets, tales and legends... I learn something new every time I visit, and I have scads of books about them. Other delightful old villages not far from home are:

These are just some of the towns I've explored within the last 3 years since moving here, but there are others I still need to spend more time getting to know: Freiburg, Rottenburg (not the Rothenburg ob der Tauber you're thinking of, but the Rottenburg near Tübingen), Sigmaringen, Ravensburg, Kirchheim, Karlsruhe...

When I visit towns here I take a guided tour if I can, but most often I buy a book or pamphlet at the Stadtinfo and set off on a self-guided tour. I read and learn everything I can about the town's history, find the significant buildings, and go into the churches.

Information I expect to learn - and I'm rarely disappointed - includes


Yep, those are the things that interest me - not where the clothes and shoe shops are. And I will keep returning to the towns near to us until I know them well enough to give at least a mini tour even though few visitors will want to hear as much as I want to learn. That's ok with me, though. I want to learn it for me.

This is the first reason I love living in southern Germany. On any day I have free, I can pick a town and go learn something new. And if I only have a short time free, I can go down into Horb and learn more about my new home town.