SURPRISE! Our Thermomix has arrived!

Disclaimer: This is not a sales pitch. I have nothing to do with the Thermomix or Vorwerk, the German company that sells it.

I've written often enough that M and I enjoy cooking together. It's fair to say that he's the better and more confident cook, but we make a good team in the kitchen.

After M used the Thermomix at the three cooking classes we've participated in and after seeing it on just about every German cooking show we watch, we decided in early May to finally order one. We were told by the salesperson (they're only legally sold by consultants who come to your home - not in stores) that it would arrive sometime in September because the orders were so backed up. It arrived today! 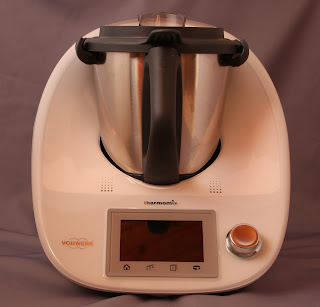 You should have seen us - we were both more excited about this gadget than we were when his new Audi arrived in May.

The Thermomix is an amazing kitchen appliance that is hard for me to describe. Click here for a very dramatic marketing video that will make you think, "Wait, it's a mixer?"

Ah, but it's so much more than a mixer. It's a mixer, blender, food processor, scale, oven, stove, steamer, and chopper all in one. I was told by one woman I met who has one that she hardly ever uses her microwave anymore.  According to the instructions, the 12-in-one appliance weighs, mixes, chops, whips, kneads, blends, steams, cooks, beats, heats, grinds, stirs, and emulsifies. Note to self: look up "emulsify".

It's great for making Hollandaise sauce because you can set the temperature while mixing - and we have some weißer Spargel (white asparagus) waiting in the freezer for this occasion. It comes with a thick cookbook and several brochures full of tips and recipes, so this will be my reading material for the rest of this week. 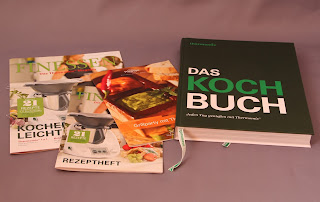 The first thing we made in it was mashed potatoes to go with meatloaf for dinner tonight. It was so easy! We peeled and sliced the potatoes, put them in the Thermomix with milk and salt (later adding butter and nutmeg), and the machine did the work. No more peeling hot potatoes, and there's less to clean up afterwards.

The thing is idiot-proof. There are pre-programmed recipes, and it tells us what to do at each step (we can also do our own thing). We just have to play with the seasonings for each recipe, because the mashies were a bit bland. Wonderfully creamy consistency, though! 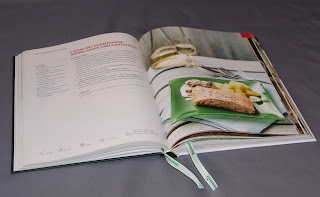 Theoretically we will no longer (often) need our measuring cups, our many and various choppers, the stove for melting or heating, our kitchen scale, or the electric mixer.

There's one funny thing about the Thermomix TM5 - funny beacuse of the emphasis on "not in any way whatsoever"...

From the Users' Manual (Legal Regulations/Copyright, page 53):
"Please note: The Thermomix TM5 has neither been developed/designed for the US market, nor has it been approved for or released in the US market. Accordingly, the appliance is purposely not being sold or promoted in any way whatsoever by Vorwerk or any other authorised third party in the USA, and no customer service is being provided in relation to the appliance by Vorwerk or any authorised third party in the USA.

I'm not sure why that is the case, but I am assuming that the appliance can be dangerous if not used properly and according to the instructions, and the manufacturer knows how lawsuit-happy Americans tend to be. Since they did not engrave "Caution: Do not stick your hand into the appliance while the sharp blade is spinning" onto the side of the mixing bowl, they probably feel it's best to just avoid the American market altogether.

Update: The Thermomix IS now available and serviced in the U.S.. (See comments section.)

But that's all for now. Dinner has almost settled, and it's time to make the chocolate mousse!

Posted by Ami im Schwabenland at 20:54