I feel like writing, but there's nothing to write about besides how hot it is. And we're among the lucky ones - here in our yard it only reached 34° (93 °F) today according to the thermometer I've begun to hate. A thunderstorm blew through a few days ago which did nothing more than raise the humidity to 94%, because the heat wasn't miserable enough. Another one is expected tonight or tomorrow. Yay.

Our roses are burning... 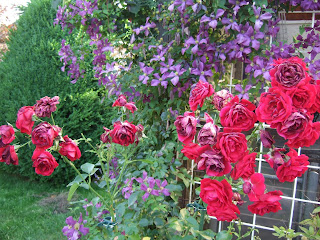 our chives have thrown up the sponge...

and our raspberries are threatening to turn into biblical burning bushes.

M and I went for a 30-minute drive today just so we could sit in the air conditioned car. Back inside - and it's 8:30pm - it hurts to blink because my eye sockets are burning.

In Wisconsin it gets HOT. Hot hot hot and humid. It can be miserable. But there is no indoor place - house, store, library, movie theater, restaurant - that is not icy cold air conditioned. In fact most places set their thermostats so low that even when it's sweltering outside, I never go anywhere without a sweatshirt if I'm going to be inside.

In contrast, air conditioning is not common in Germany. Surely not in homes or apartments, but not even in grocery store produce sections. When it's hot outside, it's hot inside. There is nowhere to go to get relief (except the car). Some train cars are air conditioned, and most buses - but you can't even be sure of that when you travel. I've taken to bringing a wash cloth with me wherever I go so I can at least mop the sweat off my forehead and neck.

There are two newish shopping malls in Stuttgart, and in the paper the other day I read that Stuttgarters are retreating there, because there IS air conditioning in these new buildings. They're closed today, though, because it's Sunday.

Gosh, and I almost forgot - the speed limit on several Autobahnen has been reduced to 80 km/h (50 mph) due to the possibility of Autobahn blowups. When an Autobahn is made of concrete, it is possible in heat like this that the cement will actually blow up, and if you hit a spot like that going 136 mph, you're likely to get killed.

Germans are convinced that it is unhealthy to have a dramatic contrast between inside and outside temperature (and I neither agree nor disagree with them). In a heat wave like this I'm sure few would grumble about having some relief in the way of central air that removes the humidity and lowers the temperature by a few degrees, at least for sleeping. But setting the house temperature to below 70°F when it's nearing 100° outside is just not a good idea. I call it environmentally irresponsible to chill a place that much, but I don't know many Americans personally who put the environment above their own comfort or convenience.

We are sweltering here, and I have little desire to do anything but sit on the living room floor in front of the fan. Someone once told me that if you put a glass of ice water right in front of the fan, it's like air conditioning. I might try that (though ice cubes are also rare in Germany, M makes them when it's this hot).

So if you are sitting in your home and not sweating, do me a favor and appreciate that. Don't take it for granted. I'm headed for a cold shower.

Posted by Ami im Schwabenland at 21:15