Driving in Germany 3: Look what I found!

STOP!! Hold everything!  Look at what I found yesterday in our little town! 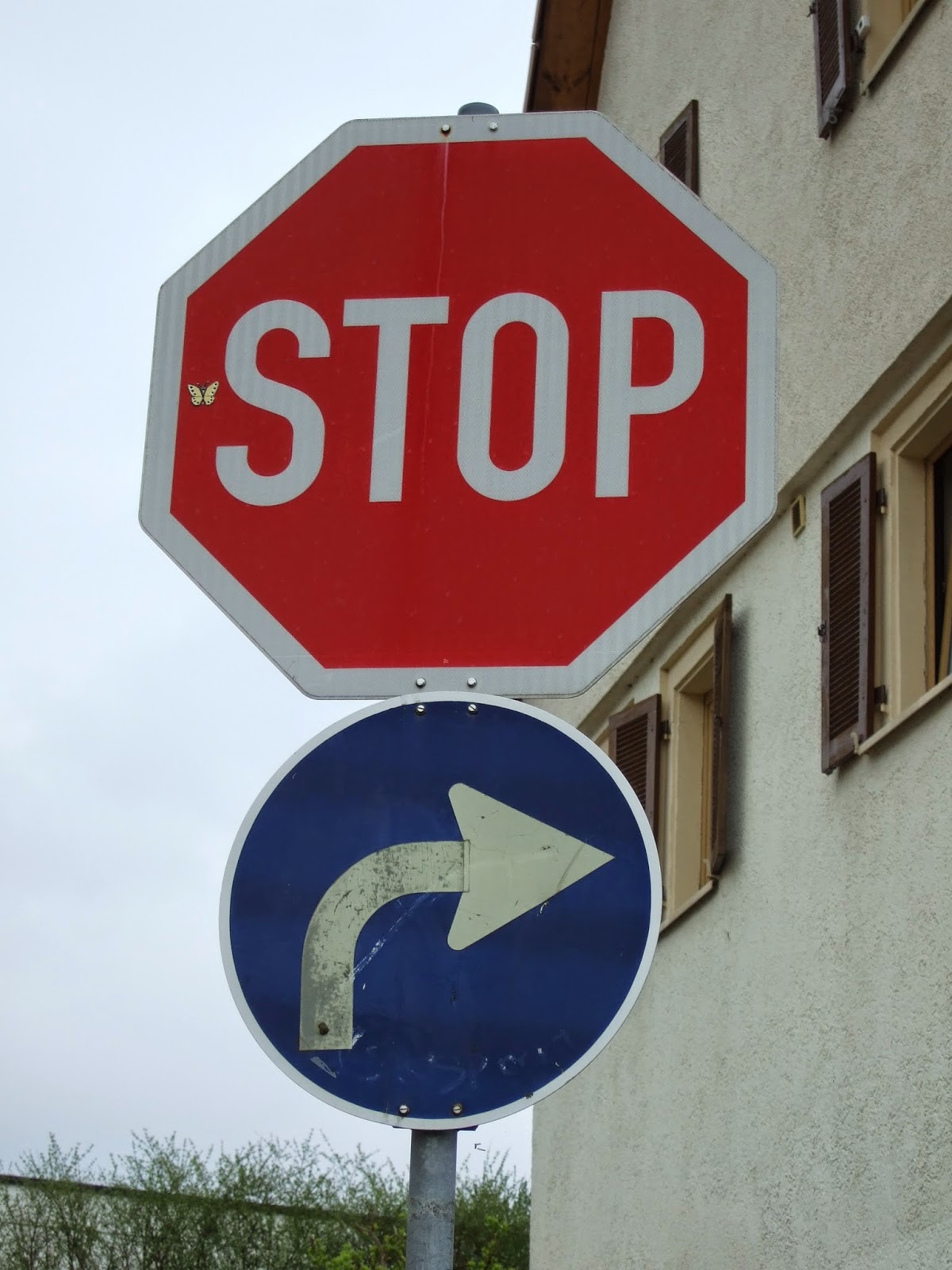 That's right - it's a STOP SIGN!  I have been on the hunt for a stop sign for several weeks now - just to take a picture of one and blog about it - but kept coming up dry. Until yesterday.* Neither in our town (pop. 2200) nor in Horb (pop. 6000) did I remember coming across one nor could I find one. But this one is at a narrow T-intersection with limited visibility on a street coming from a residential area onto the highway snaking through our town. It's such a sketchy corner that a left turn here is illegal.

My German readers are wondering, "What's your point?"  My American readers are thinking, "What do you mean there are no stop signs? How does THAT work?" In Wisconsin not only do we have stop signs on almost every corner where minor streets cross major ones, but we even have multiple stop signs in grocery store and shopping mall parking lots! Uncontrolled intersections are almost unheard of, and 4-way stops (meaning EVERYONE has to stop whether there are other cars in sight or not) are the norm.

I can almost assure you there are no 4-way stops anywhere in Germany. Where there is an intersection where cars come from more than three directions, there is either a stoplight or a roundabout. Many intersections are only three-way intersections, and for those the Germans have the "rechts vor links" rule. Simply put, if someone is coming from your right, YOU YIELD unless there is a sign telling you you have the right-of-way.

Incidentally, the speed limit in residential areas in Germany is 30 km/h, which is 18.5 mph. Damn, it seems faster than that - or maybe it's that I'm the only one actually driving the speed limit. The speed limit for normal streets within city limits is 50 km/h, which I just discovered is 31 mph. It has always felt like 50 mph to me...

I must admit, though, I like the lack of stop signs. If no one is coming, I don't need to stop even when I'm turning onto a main road. Of course I slow down and make sure, but if I no one is coming, I can keep going. Why are there no stop signs in parking lots in Germany? I suspect it's because officials are counting on drivers' grasp of the obvious: if there are pedestrians walking in the parking lot, don't hit them. Where there are intersections in parking lots, the "rechts vor links" rule applies. In situations where signs and rules are unclear, drivers tend to do their best not to hit anything or anyone, because it messes up their cars.

And just sayin', but the person who thought to develop the roundabout instead of the 4-way stop deserves a medal. Simply brilliant.

*To be fair, the only reason I was able to find the above stop sign in my little village was because it was mentioned in the local newspaper the other day. I think it's new.