I like eggs: scrambled, poached, fried, hard-boiled, omelettes, egg salad sandwiches, breakfast burritos, quiche... In Wisconsin I bought eggs at the grocery store and never thought about or cared where they came from. Germans like to know where their fresh food originated. In this week's grocery store flyer, for instance, I can see that there are special prices on: lettuce from France, tomatoes and onions from the Netherlands, oranges from Spain, apples from Chile, pears from South Africa, and carrots and rhubarb from Germany. The more local, the better, in most cases.

In Germany all eggs (except colored Easter eggs) are stamped with a code that tells the consumer something about the history of the egg. The code looks like this:

The code is interpreted thus:
2 = Bodenhaltung  (came from a barn [but not caged] chicken)
DE = Deutschland  (the chicken resides and laid the egg in Germany)
08 = Baden-Württemberg (the farm is in the state of Baden-Württemberg, where we live)
02992 = the code for the farm (this one is in Bondorf, 12 km from our home)

So I know that this particular egg and its nine companions, which are in my refrigerator right now, are from a local farmer, and I love supporting small local businesses (I bought the eggs from our butcher)! Oh yes - egg packages here come in two sizes - either six, or ten. We can't get a dozen eggs here, which still seems strange to me.

I also have two eggs left from the previous pack of ten, which I bought at the grocery store. I checked out their code:

Ok, still barn-raised and still Germany. But if our state is 08 (the first two digits after the country code), then these eggs didn't come from anywhere near us. Conveniently, there is a website, whose title translates to "What does it say on the egg?," on which I can look up where these little buggers came from. I punched in the code and discovered... they came all the way from Thüringen! The farm is located in the town of Wandersleben (never heard of it), which is 385 km away!  Tja, those chain grocery stores... They're fine for convenience, but not necessarily for freshness or supporting local farmers.

By the way, yes the package also tells me whether the chickens were barn-raised, free-range, or "ecologically produced" (there is also a code for eggs from caged-raised chickens, but who would buy those?), but if I really want to get to know my egg, I can find out more from the code. 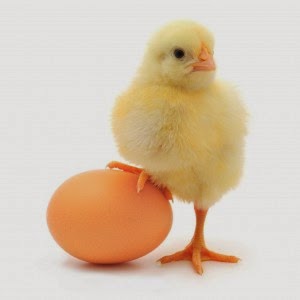 And here's something else waaaayyy different about eggs in Germany. Each package - even one shipped in to the grocery store from way off yonder - comes with two "best before" dates. The earlier date is the one to use if you don't keep them in the refrigerator. WHAAA? Who doesn't store their eggs in the fridge? Lots of Europeans, it turns out, at least in the countries where it's not blazing hot. The eggs in the grocery store and at the butcher are not stored in a refrigerated section, either. They're just on shelves. Especially with fresh eggs, there is no reason they need to be rushed to the refrigerator. Room temperature is just fine, up to two weeks. If they are stored in the fridge, they can last two to four weeks beyond their "best before" date - or so I just read on www.eier.de. We store ours in the fridge because that's what I'm used to and we don't have a lot of counter space. But I am no longer shocked when I see raw or colored hard-boiled eggs just sitting out on counters or shelves in stores.

Our butcher has a sign letting customers know that the meat she sells has been born, raised, and slaughtered in Baden-Württemberg, which is important to a lot of the locals. The meat is more expensive than at the grocery store, but the frugal Swabians draw the line at saving Euros by buying mass-produced meat that comes from some other sketchy country (or state). It's the same with eggs and fresh produce. The purists prefer to buy those at an open-air market or local farm rather than in the grocery store where the produce, for instance, often comes from other countries and has been on a truck for several days.

Like many people in Wisconsin are doing as well, the law of the land around here is BUY FRESH! BUY LOCAL!
Posted by Ami im Schwabenland at 23:09