I live in a learner's paradise. Whether your interests fall under history, architecture, art, religion, literature, geography, or all of the above, you can explore those interests here and get lost in them for hours. By "here" I'm referring at the moment to our local area and the small town of Horb specifically, but I could say the same about every place I've been to in Europe.

The town of Horb has a population today of about 5600, and its documented history goes back to the year 1090, when it was first mentioned in written records in old high German as horv or horva, meaning "bog" or "swamp." The Neckar River flows through Horb, and the entire old town was wisely built on the hill beyond the bank of the river. So the town was founded in the Middle Ages and has survived plague, famine, invasions, the Reformation, two city fires, countless wars, and floods. The buildings have been renovated, rebuilt, redesigned, and repainted, the Fachwerk (half-timbering) has been plastered over and then uncovered again, and all along the town has retained its charming and photographic silhouette, dominated by the Stiftskirche.


A full-page article appeared in the local paper last weekend providing some fascinating information about two structures in town which I have noticed and wondered about, but hadn't checked into yet. The following is my English summary of what I learned from the article and additional reading.

Until the middle of the 19th century, Horb had more than six city gates along the old town wall. The only one still standing today is the Ihlingertor, named for the street that passes through it leading to the village of Ihlingen just to the southwest of Horb. It was first mentioned in 1273 and is the only gate known by a second name, the Luziferturm (Lucifer's Tower), as it was first called in 1445. From 1580 to 1630 the tower was used as a prison, and a plaque on the structure says "Hexengefängnis" (witches' prison). The reason this gate was not torn down like all the other ones was that it did not belong to the city, but rather to a local manufacturer who lived in the neighboring house and had part of his factory in the tower.

The gate is located in the west of the town, and this is where one needs to consider Christian symbolism to fully appreciate the gate's significance and understand its evil-sounding nickname.

In Christianity, the East symbolizes the rising sun, light, and Christ, who will come from the East on Judgment Day. The West represents the setting sun, darkness, night and death, evil, sins, the dark powers, and Satan. Satan was known as the Morning Star until his fall from heaven (Isaiah 14:11-15), and the Latin word "Lucifer" indicates the Lichtträger (bringer of light), or the morning star. If I am not mistaken, the name Lucifer is not actually used in the Bible, but rather came into use because of the passage in Isaiah where the former angel is called "morning star."

In Horb it was often said that on certain days the morning star (the star now, not the devil) could be seen through the Luziferturm. Although this was never seriously proven, it is a plausible source for the gate's nickname. In the Middle Ages and beyond, people were constantly reminded of the powers of sin and temptation. It was part of their daily life and the world around them. This gate, with its ominous nickname and location on the western wall of the town, served not only as an important passageway into and out of the town and a protective, defensive barrier against intruders, but also as a reminder to Horb's citizens to guard themselves against the powers of darkness and the hostilities of Satan.

In the photo above of the Luziferturm, you can just see the building through the gate, which now stands where the Rabenwirtshaus used to be. The current building is bright red as of the second story. The Rabenwirtshaus was an inn until 1853, when the new owner changed its name to the "Schwanen" (Swan). For inns, the name "Schwanen" was and is not unusual, but the name "Raben" (Raven) surely is.

The names of inns typically reflect the spirit of the times (of their origin or naming). The oldest establishments often have names of biblical origin. Christian symbols (and names of inns) should give visitors a feeling of safety and security. Names such as "Dreikönig" were dedicated to the Wise Men, who themselves were travelers. Other names like "Adler" (Eagle) and "Löwe" (Lion) reflect the evangelists Johannes (John) and Markus (Mark).

In Horb, the "Raben" was one of the oldest inns, and the earliest known owner was Johann Eger in 1737. Since animals have such strong allegorical significance, one wonders why an innkeeper would name his establishment "the Raven." This black and evil-looking bird doesn't exactly present a good advertisement. The raven has a bad reputation because of its color and its piercing screech. He is a bringer of bad luck and a messenger of death. His reputation for eating carcasses goes back to the Bible, where, according to Deuteronomy 8:7, the raven left the arc to feed off emerging cadavers and didn't return. Because of this it symbolizes shameless, impure, irreverent prisoners of sin. It is a demon, a heathen, a sinner, who delivers intemperance and decadence into the world.


In addition to its location in the west of the town and its proximity to the Luziferturm, the name "Raben" for the inn fit into the Christian world view for another reason.  The area just inside the Luziferturm near the inn was the town's Rotlichtmilieu (red light district), known as Horb's Sündenpfuhl (sin swamp) in the late Middle Ages. Could it be that the building today (built in 2005 after damage to the old building from a mudslide required it to be torn down) is painted in such a bright red color to reflect this history?


In 1855 the new owner of the "Raben" turned the building into a brewery and changed its name to the "Schwanen". The brewery was in business until 1944. As was common for businesses, a swan figure hung above the front door indicating the name of the establishment (helpful in the old days especially for the many people who couldn't read). On the new building the swan has shed its Christian symbolism in favor of Greek mythology and has become Zeus in the form of an enthusiastic swan aiming to seduce the buxom and unclad Leda (wife of Spartan king Tyndareos and future mother of the immortal Pollux), who is taking to her heels to escape his lust. The sculptor is Peter Lenk, who also sculpted "Imperia" on the pier in Konstanz. 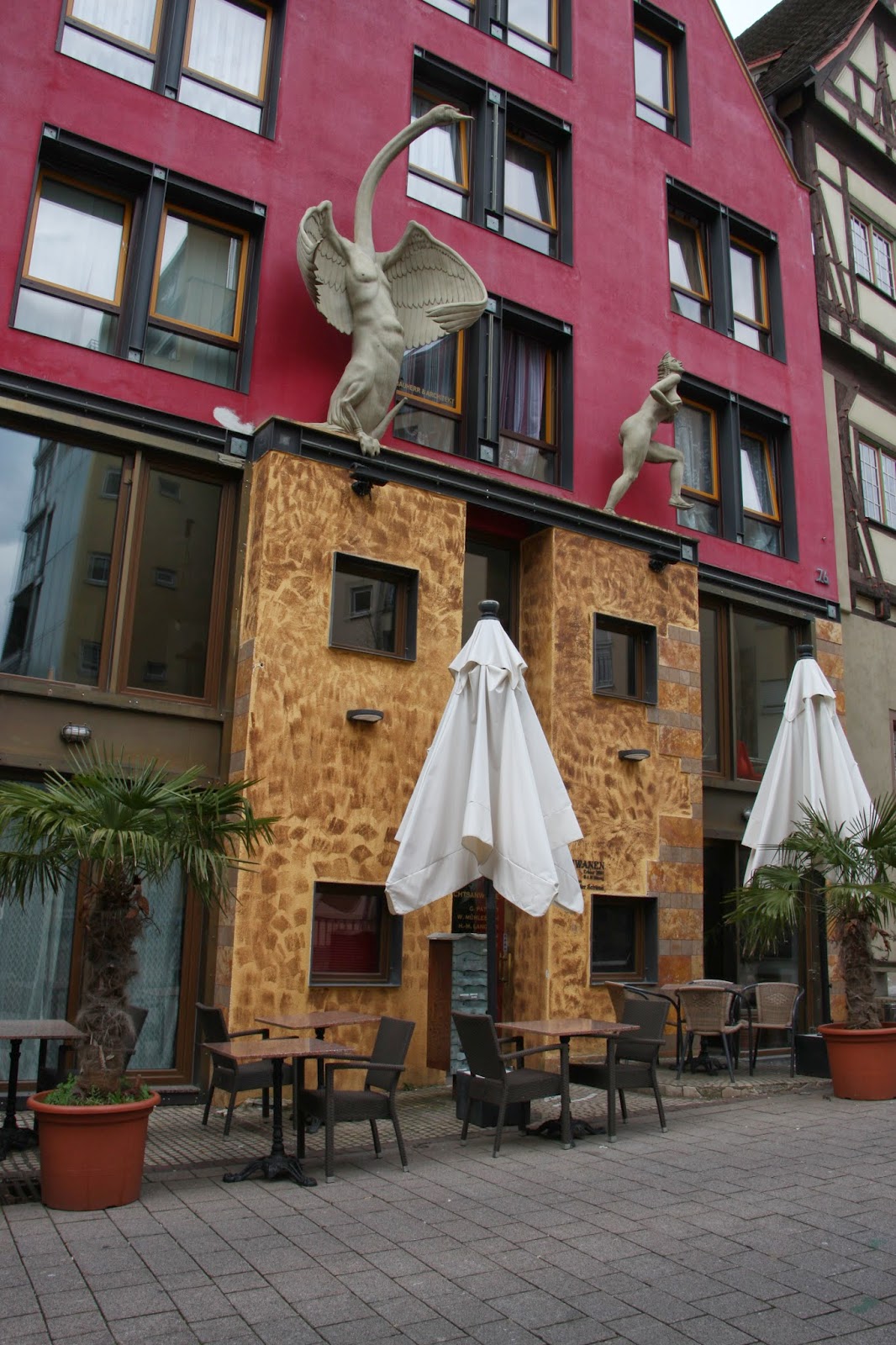 I have seen those scandalous statues on this bright scarlet house before and wondered why on earth....?? I didn't dare ask any questions and couldn't answer any, so when I walked past the building with my parents on our tour through Horb, I was relieved when they didn't look up. Now, however, I know and can tell an interesting story about this wicked spot in Horb, Lucifer's Gate, and the building formerly known as the "Raben."