Really? A whole blog post dedicated just to bread?  Yep. And I'm not alone. Many American Expat bloggers say one of the things they miss the most about Germany when they go back home is the BREAD!

For the record, let me say that I am not of the mind that there is anything wrong with American bread. I mean the type of bread most Americans buy: packaged, soft, and with a shelf life of 7-10 days, like Home Pride, Harvest Home, and store brands.  This bread is good for sandwiches, toast, pudgy pies and french toast, which is usually what we use it for.

PB & J would not work well on German bread, and french toast and pudgy pies are out for sure. Granted, we also have Toastbrot here, which is just like American sandwich bread, though without the end pieces, for whatever reason. It's really only used, though, for Toast Hawaii, regular toast, french toast, and for people who want to eat bread but don't have any teeth left (or yet).

This is  Toast Hawaii, which was invented by a German TV cook in the 1950s. It is a piece of Toastbrot (sandwich bread) topped with a slice of ham, a ring of pineapple, a slice of nasty processed cheese (we have switched to Gouda), sprinkled with paprika, and baked in the oven for a few minutes. Some people add a fake cherry on top to add a fancy Hawaiian flair.

The equivalent in the U.S. would be a grilled cheese sandwich. It's popular with kids and quick when you don't feel like cooking a proper meal.


We Americans are used to eating sandwiches on soft bread. It's what we're used to. We like it that way. Sandwiches here are made with hard rolls - like Kaiser rolls, for instance, but hard and crunchy on the outside. You can buy similar rolls in America, too, but they're only found in the bakery, and they're still softer than German rolls (on the outside). 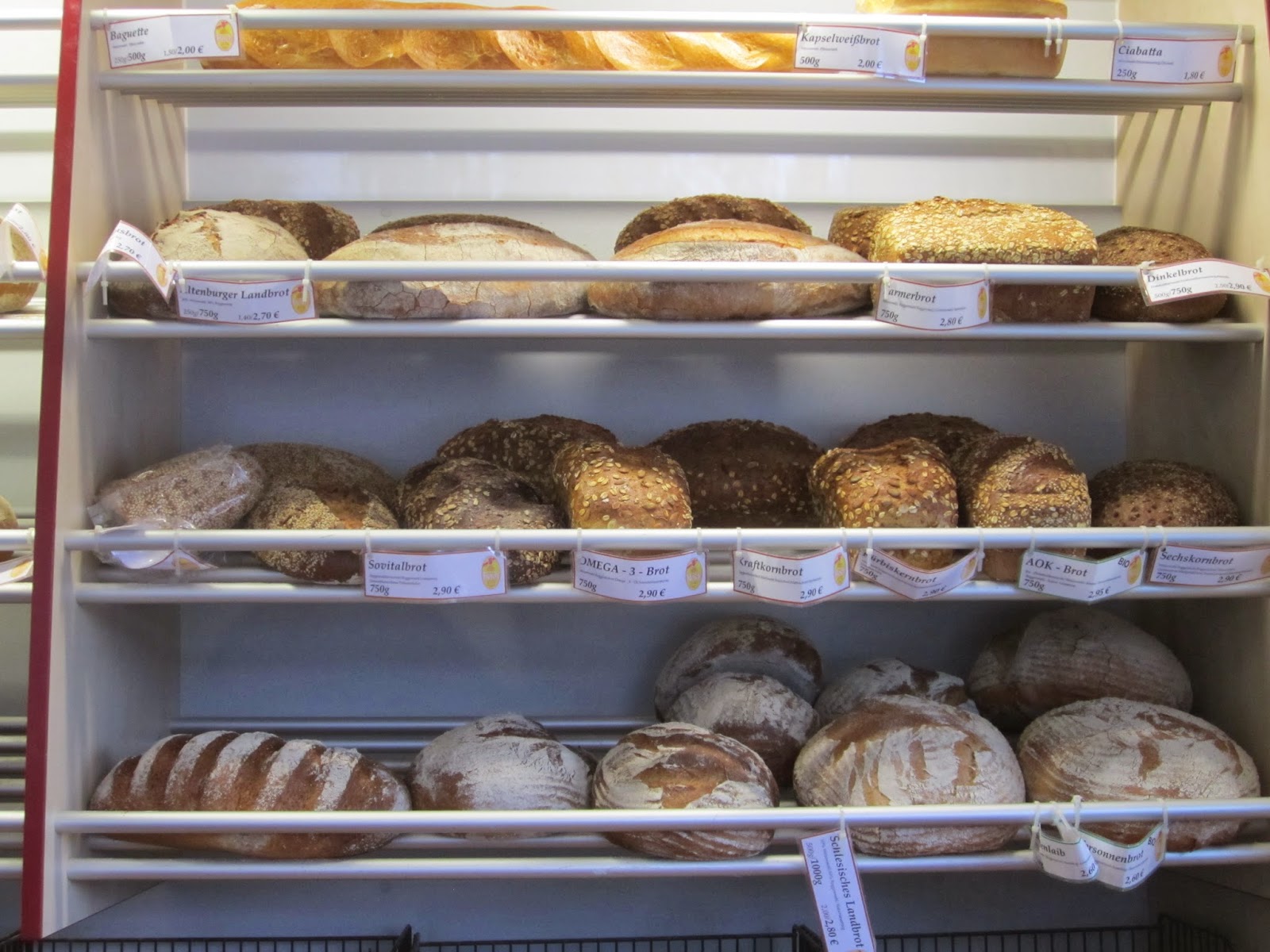 So what do bakeries look like over here? They do sell delicious sweets, but their focus is on bread, rolls, and pretzels. This photo shows just the rolling bakery that comes to our street once a week, and even they have more varieties of bread than I've seen in bakeries in Wisconsin.


I count 16 different types of loaves.

While on the exchange 28 years ago, I found out that white bread is not as popular here as dark bread. The darker, the healthier, I think. My host family will be glad to read that, while I still like Tafelbrötchen, I no longer buy white bread in loaves. I still don't go for nuts and seeds in my bread (Vollkornbrot is something I just can't eat), but I do like Bauernbrot, Jogurtbrot, and Roggenbrot, and I'm getting brave enough to try other dark, mysterious loaves.

German parents can give their young children a piece of bread to teethe on. It's like giving a rawhide bone to a dog - they can gnaw on that thing for hours before it turns into a slimy, gooey mess.

This is the end of a loaf of Bauernbrot I bought on Saturday. Judging from our fancy built-in bread slicer (thanks to the woman who owned this house before us!), there are about 4 slices left. It still weighs half a pound (225 g). I just weighed 4 slices of Toastbrot, and that came to 3.5 ounces (100 g). I'm not dissing sandwich bread; I just still find it funny that carrying a loaf of German bread home feels like lugging a lump of lead. In the U.S. the bread needs to go on the top of the grocery bag so it doesn't get squished. Here the bread goes in first, next to the sack of potatoes. It wouldn't even make any difference if it were under the sack of potatoes. 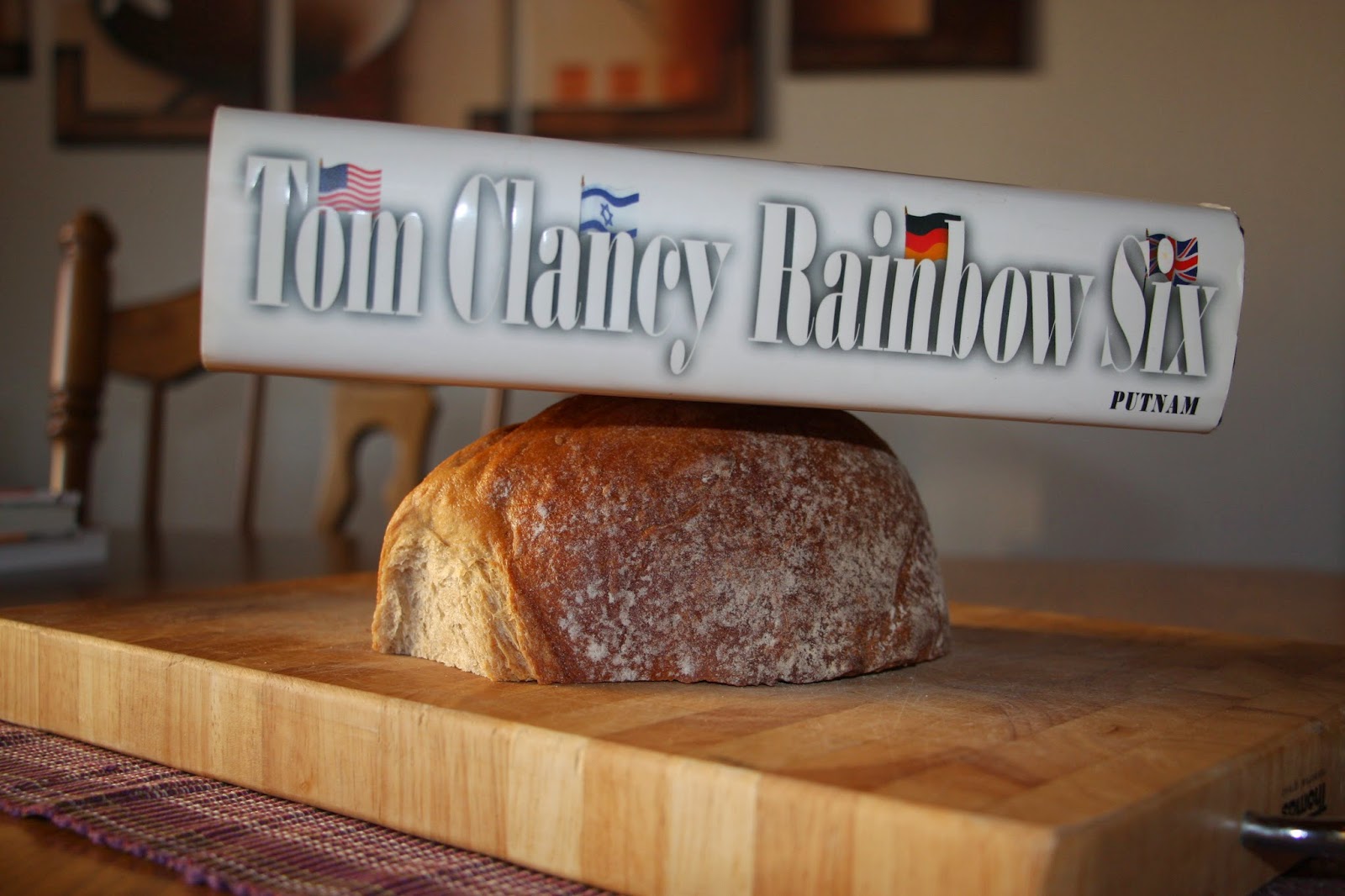 And for those of you who think I'm exaggerating about the heartiness of this bread, here it is again with a hardcover Tom Clancy book on it. No tricks. (I don't know how to use PhotoShop.)