Today is Schmotziger Donnerstag ("Dirty Thursday") in Swabia. This day is similar to "Fat Tuesday", which some Catholics in Wisconsin celebrate the day before Ash Wednesday. Even at my former (Catholic!) school in Wisconsin we teachers organized a "Fat Tuesday" luncheon, a potluck of sorts, so we could pig out before settling in to the guilt and penitence of Lent. We had that in the staff room during the lunch period, and then we went back to our classrooms to finish the day.

Here in the Catholic communities of Swabia, the lead-in to Lent is quite different. It started in earnest today. The Narrenzünfte (fools' guilds) put on their costumes, take over the towns, ceremoniously take the key from the Bürgermeister (who cheerfully gives it up because he has no other reasonable choice), set the school children loose at noon, and wreak havoc in good fun. The town keys are humbly and sheepishly returned on Ash Wednesday by those who can still walk, as the local beverage store owners gleefully count their tills. It's like Black Friday for the venders of beer, wine, and liquor. 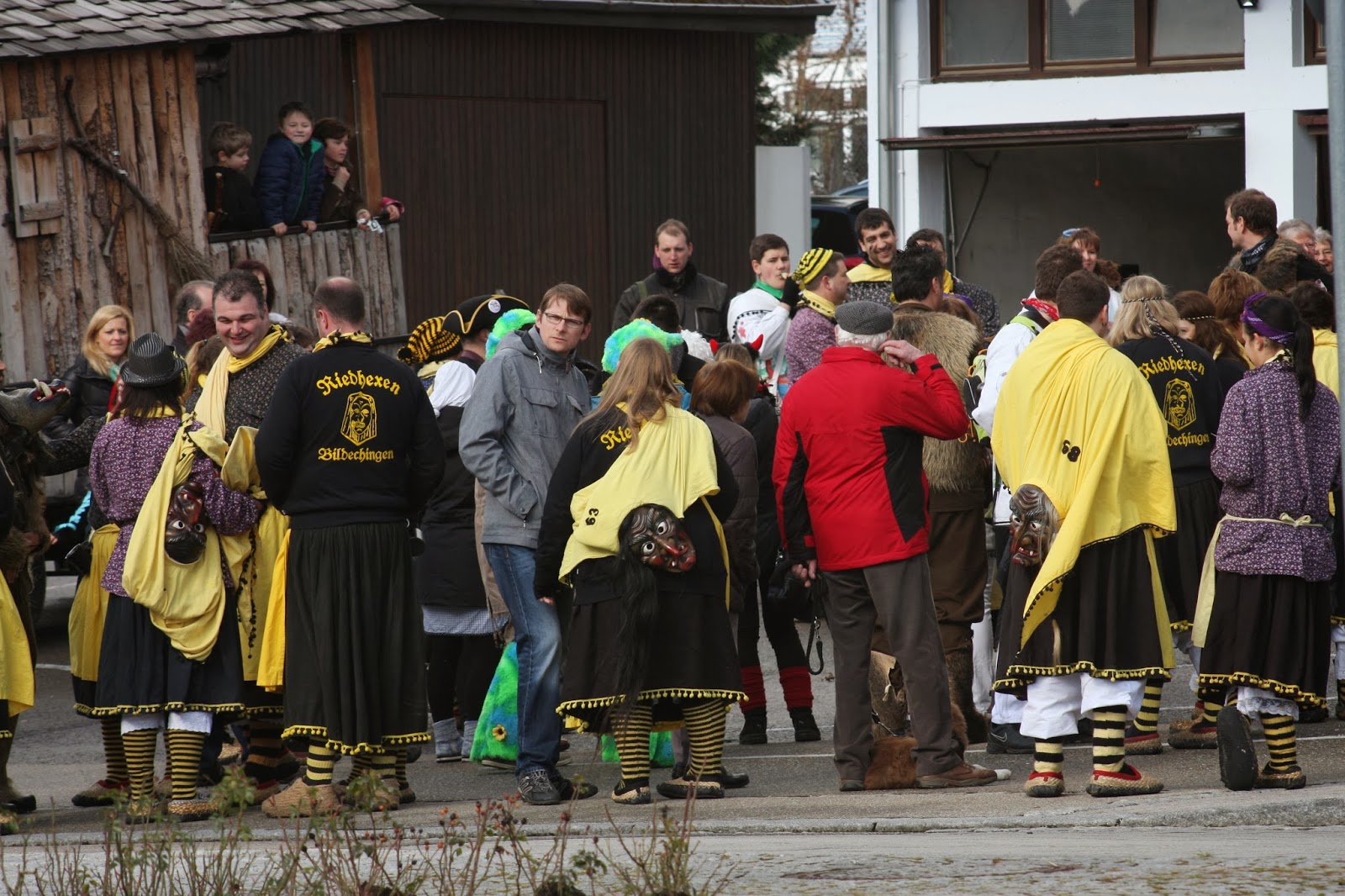 The Fasnet costume of our town must be black skirts with black and yellow striped stockings. Most of the Narren are dressed this way. To take these pictures I was standing across the street and using my telephoto lens. If you are wondering why, close in on the guy near the center with the gray jacket. That's the look I get when someone who doesn't know me sees me taking pictures.

I was invited to the after-school reception for teachers at the school where I teach the Englisch-AG, so after giving the students time to disperse, I headed over there. The headmaster, a friend of mine, greeted me wearing Lederhosen and a felt hat and playing the accordion, his brother (also a teacher and a friend of mine) was dressed in overalls and funny glasses, and most of the other teachers were in costumes as well. So it's a bit like Halloween in Wisconsin. The work was over for the day, so they had donuts (Berliner, called Fasnetsküchle this week), cookies, and Sekt (like champagne) spread out on the conference table. Back in Wisconsin, at least during my years at the school, we had to relocate from the school grounds to a nearby bar to toast the start of a break.  Not here!

The group sang Swabian Fasnet songs as the headmaster accompanied with his accordion, danced or clapped along, and generally just had fun. They then brought out a contraption that scared me at first - but all it was was a catapult kind of thing that they loaded up with a Schokoküssle (large chocolate-covered marshmallow). You had to throw a ball at one part of the machine, and if you hit the right spot, the Schokoküssle would be flung at you to catch. Each of us had a go, and most of us successfully caught the Schokoküssle (and then had to eat it).

My teacher-friend explained to me that Fasnet (called Fastnacht, Fasching, or Karnival in other parts of Germany and Mardi Gras in N'Orleans) is and has traditionally been mainly a Catholic thing. In traditionally Catholic towns like Bildechingen, Eutingen, Horb, Rottenburg, etc., Fasnet is very popular, and you're kind of the odd-one-out if you're not in costume. In Protestant communities like Mühlen (3 km from Bildechingen), Tübingen, and Freudenstadt, business goes on as usual. In Horb if you're not into all the shenanigans of Fasnet, you might want to pack up and get the heck out of Dodge until Ash Wednesday. If you live in Freudenstadt and want to party, you pack up and settle someplace more Catholic and fun for a few days.

As if on cue to illustrate his point, a man came in with a delivery of something and briefly said hello as we were singing, dancing, and toasting with Sekt. As he was leaving my friend called enthusiastically with a twinkle in his eye, "Schöne Fasnetszeit!" ("Have a nice Fasching-holiday!") The man replied, "Nein, nein. Ich bin aus Freudenstadt. Zum Lachen gehen wir in den Keller." ("No, no. I'm from Freudenstadt. We go into the cellar to laugh.")  The point being, if that wasn't clear, that when Protestants have fun around here, they do it in the basement so no one can see or hear them behaving so shamefully.

Believe it or not, another person showed up during a song when we were all swaying side to side in unison, and stood for a moment in the doorway. She was wearing bright green shiny pants, so I thought she was a teacher and that was her costume. We stopped the song and the swaying and the headmaster gave her a "'S'up?" look. She said "I'm here from the school in Dornstetten (my friend whispered to me that that's another Protestant town), and I'm supposed to pick up [something I didn't understand]."  My friend offered her a Fasnetsküchle while the headmaster went to look for the thing she was supposed to pick up. He came back with it, and the woman pointed to her pants and said, "Well, I'm somewhat dressed up..." The headmaster replied, "Yeah, that's close enough for Dornstetten." He serenaded her with the accordian as she left to return to her boring little Protestant village, where the schools are still in session...

For the record, I wasn't really correct when I said that the lead-in to Lent started today. It actually started in Swabia on Jan. 6, with the 12th day of Christmas (Epiphany). Right after the local children go around and write the blessing on everyone's doors, the villagers get ready to party. There are mask-dusting-off gatherings, anniversary celebrations for various Narrenzünfte, a parade now and then, Fasching-themed parties, dance shows, and so on from January 6th to Faschingsdienstag ("Fat Tuesday"). But the heavy stuff (including, for some, the heavy drinking) begins today.

One of the things that fascinates me here is that nearly everything from the local customs, the architecture of buildings, the habits, the rules, and the fun-and-games have a rich history. One way to look at Fasnet is to see a bunch of drunk costumed fools running around causing traffic chaos, a mess, and a nuisance. But I'm learning there's much more to it than that. It's not really my thing (I grew up Protesant, after all), but I am starting to see why it is fun for others. I can't get excited about drinking and partying, but I can get into anything where there is something to learn about local traditions.