Last weekend this small town girl headed off to the Big City to visit my daughter, who is studying in Berlin. I flew to Tegel, where she met me and led me back to her host family's city flat. Although Tegel is Berlin's main airport*, it's small and there is no U-Bahn or S-Bahn that goes there. One has to take a bus to an S-Bahn station and then take a combination of S-Bahns to get to your final destination.

*Granted, Tegel isn't supposed to be Berlin's main airport. The new Berlin Brandenburg airport was supposed to open in June 2012, but due to a huge cluster-flup leading to about 66,500 problems such as escalator treads not reaching fully to both ends of the escalators, the opening has been delayed. No one knows when it can open for business, but optimistic guessers say maybe 2015.

The first time I was in Berlin was in 1986 (pre wall-fall), and the last time was in 1991 (1.5 years after the wall came down). Unsurprisingly, a lot has changed since then, and there was only one brief moment when we were walking in Alexanderplatz when I had a flashback to 1986 and recognized where I was. I remember this from 1991, but it is still a surreal experience to have toured Berlin when the wall was still there (not having any idea that it some day wouldn't divide the city) and now to walk through the Brandenburger Tor and freely around areas like the Museumsinsel and the Nikolaiviertel.


I found Berlin to be mainly just big city - big building after big building, and every now and then an incredible landmark, famous beautiful old (reconstructed) structures, memorials, and one pretty section (the Nikolaiviertel). My daughter reminded me that I came at a terrible time. November is not a pretty, pleasant month, the weather was dismal and gray, and the Christmas markets, which we both love, don't open until next week. However, the time spent with her in this city she has come to love was precious, and I'm so glad I went!

She led me around the city on foot and by S-Bahn, and we saw most of the main attractions. 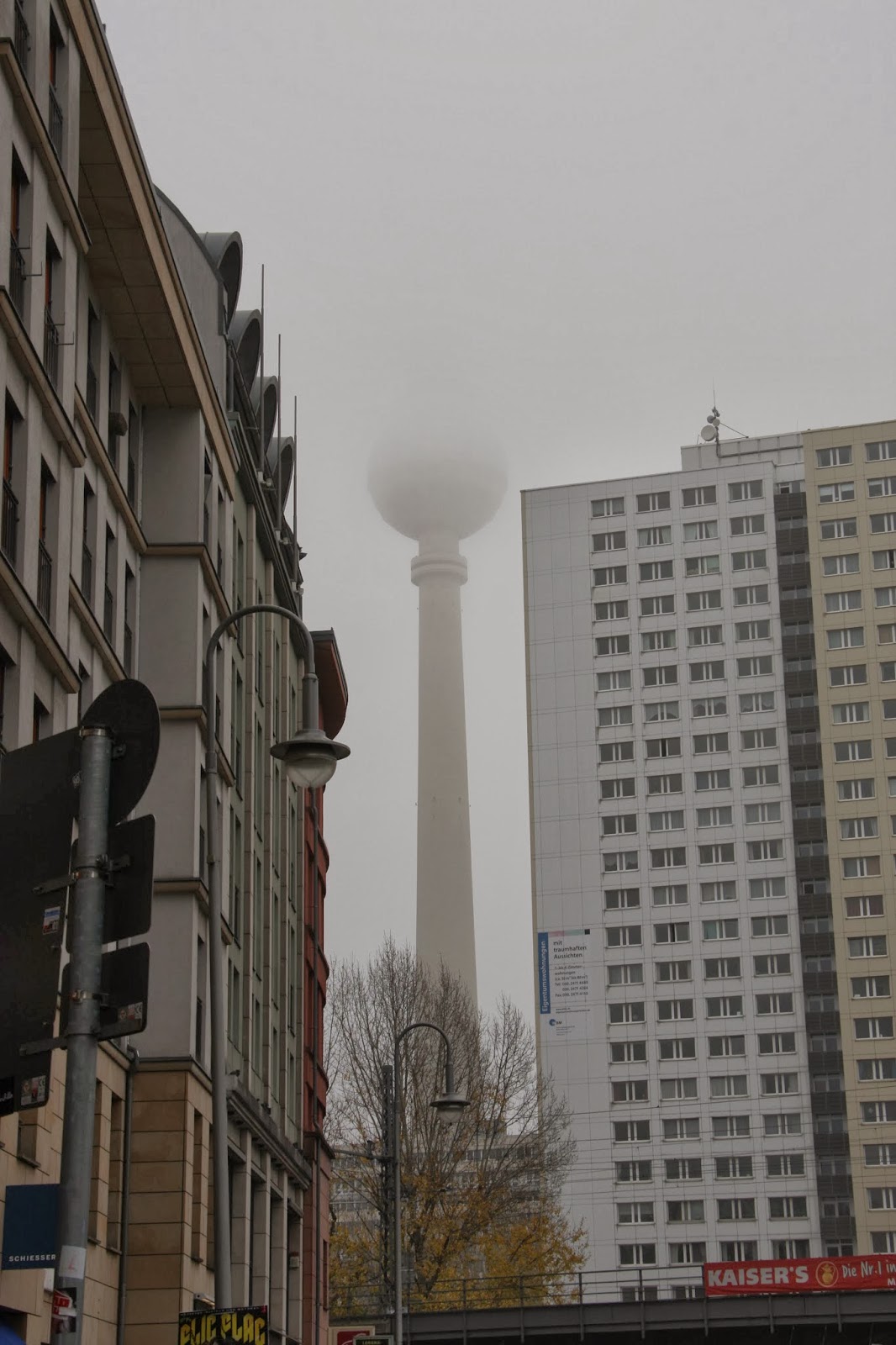 Fernsehturm (Television Tower): we decided not to bother going up it to stare into the fog. ==> 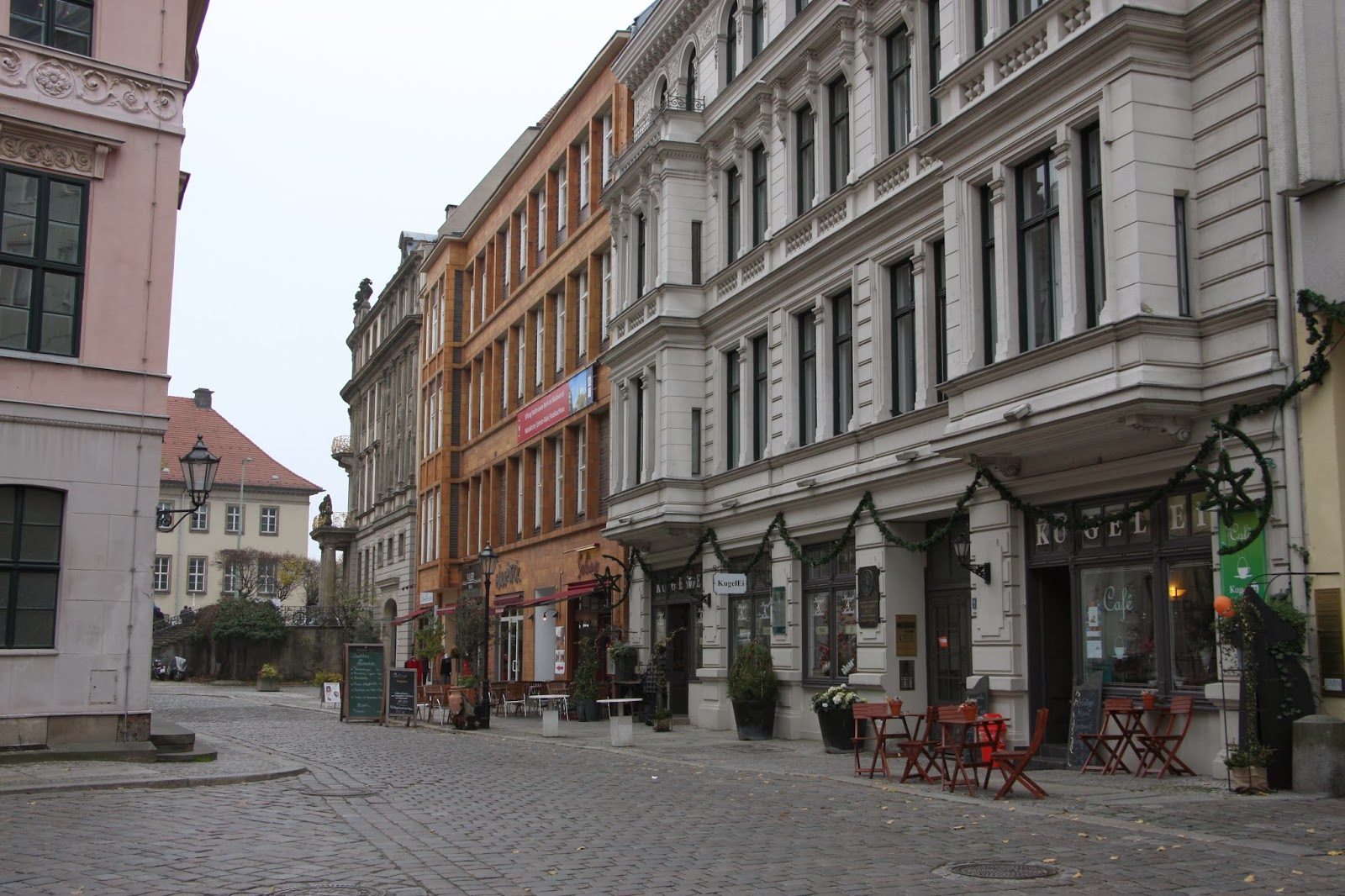 The Nikolaiviertel, designed and built up for Berlin's 750th anniversary in 1987. It has the look of somewhat-old  Berlin, and it's a charming area.


One of the great things about the big city is that one can find just about every cuisine in the world. We ate Spanish, Turkish, German, Italian, and American food. And no, even though you can't swing a dead cat in Berlin without hitting a McDonald's, that is NOT where we ate. An American woman appears on our noon show ("ARD-Buffet") every now and then who has several cafes in Berlin. We found one very close to Stephanie's flat, had a delicious cappucino and I had a bagel (nearly unheard of in Germany) while Stephanie had a chicken salad sandwich. This cafe (Barcomi's) is in a second Hinterhof (inner courtyard) on Sophienstraße, and I do recommend it! 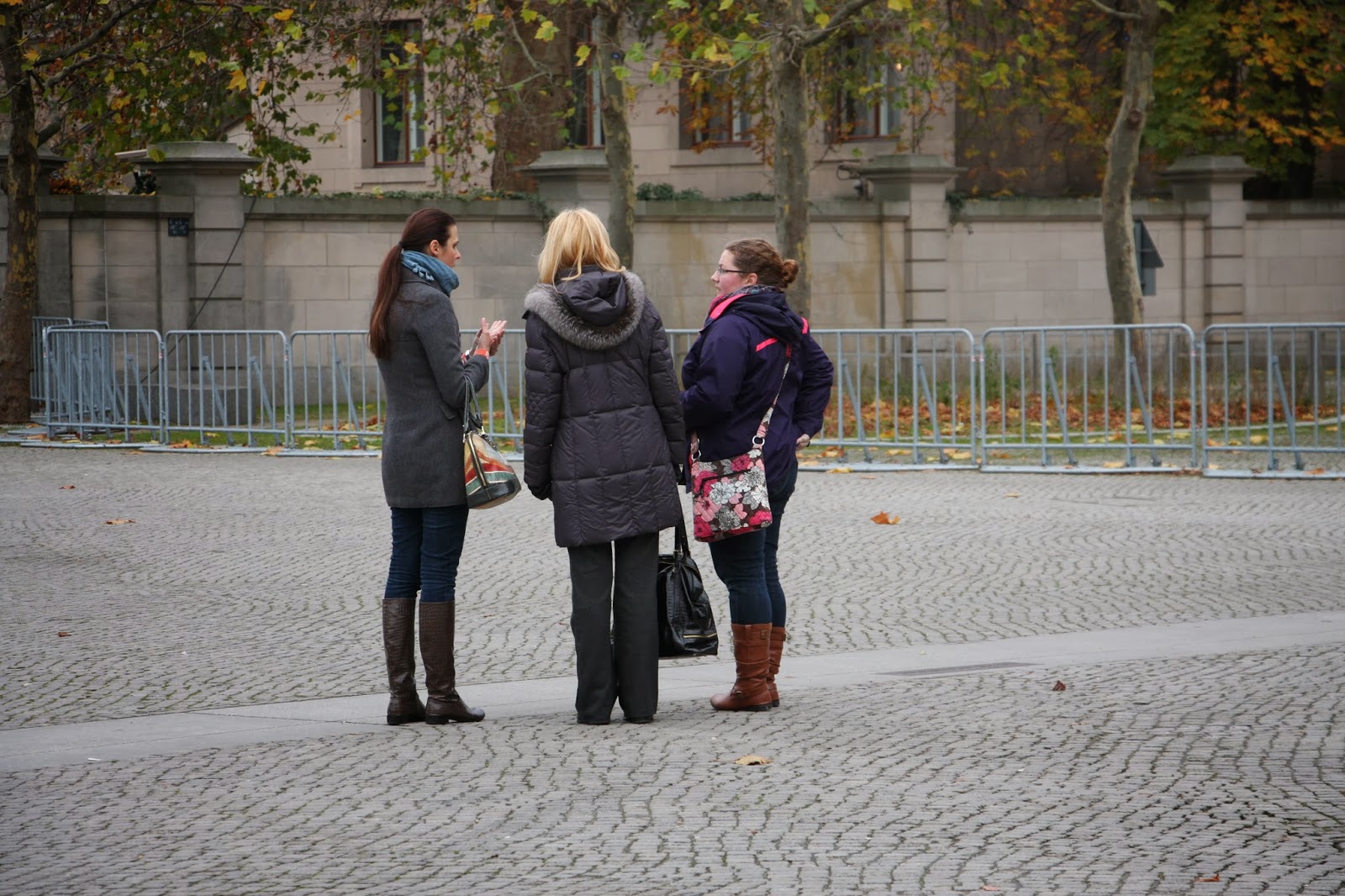 On at least two occasions, Stephanie was asked by tourists if she could give them directions somewhere. That was fun for me, though one of them freaked me out a bit at first. I have a pretty developed sense of other people's presence around me, and so I noticed a guy following us away from the Brandenburger Tor and across the street. Stephanie was pointing in various directions and telling me where things were, and we took a sharp turn and headed to the monument to Roma & Sinti victims of the holocaust. The guy followed us into that area too, and just as I was about to turn to him with my "Don't think I haven't seen you...Back off, Buster!" expression, he approached Stephanie and said, "You sound like you know what you're talking about. Can you tell me where the Jewish holocaust memorial is?" She pointed him in the right direction while I still kept a wary eye on him, but he did seem to lack the ill intentions I'd assumed he had.

I must admit, I was glad to get back to our quiet little one-horse town* where I know my way around, but there certainly is a lot to see and do in Berlin! I can well imagine Stephanie being glad to get back to bustling Berlin after visiting us during her week-long fall break. My favorite parts of this trip were accompanying Stephanie to the school where she does her practicum helping students with disabilities, watching her confidently navigating the public transportation and steering me around the city, seeing how she studies (photo below), hearing her speak German with her host mom and waiters, and just hanging out with her. I wish she were staying longer, but I love knowing that she will return to Germany as often as she can.

*I learned during our English lesson yesterday that in Spain our little Dorf would be called a "four-cats town"!
Posted by Ami im Schwabenland at 09:50