My kingdom for a garbage disposal


Lest my readers get the impression that I think everything over here in Germany is better than in the U.S., I thought I'd mention a few of the things I miss.  Obviously I miss my people and spending time with them - my children, parents, extended family, and best friends! Following are the things I miss at times.

Ours only suck.  Pun intended.  Granted, we have no carpeting but rather all wood and tile floors. But when it's time to vacuum our area rugs, I switch the floor tool for the carpet tool. Why, I am sure I do not know. The carpet tool still only sucks. It's just bigger than the floor tool and has wheels.

Unheard of over here because they wouldn't be legal anyway. We are not supposed to put kitchen junk into our sewers, no matter how ground up it might be. That goes into the Biomüll, of course. What about something like stew, which is too liquidy to go into Biomüll and has chunks of meat and vegetables? You shouldn't be disposing of that anyway. You're in Swabia - food is to be eaten, not wasted. Some people pour thick liquidy things into the toilet. I guess worse things are flushed down there than asparagus cream soup, but in general that practice is frowned upon. 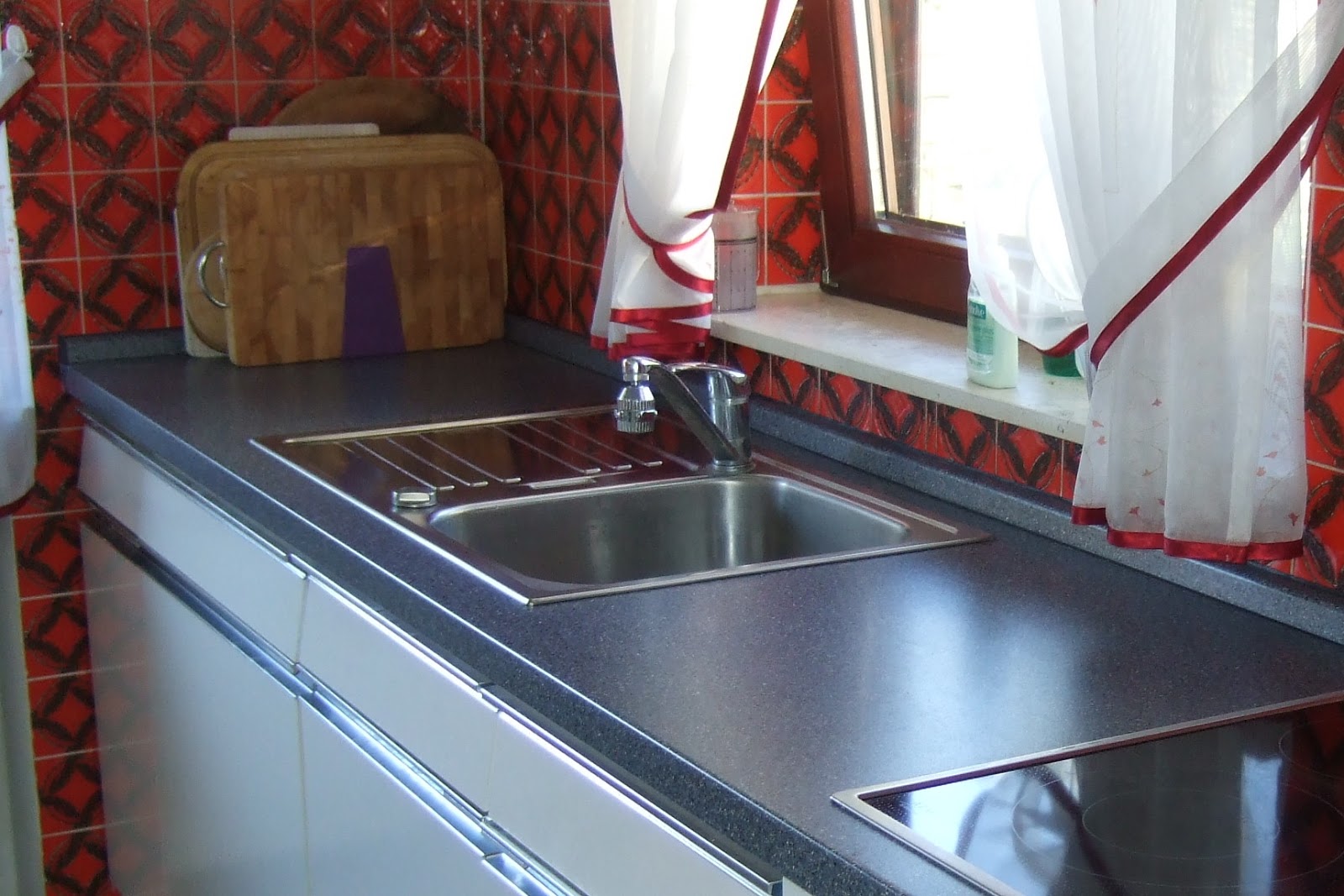 I am not sure which genius decided that kitchen sinks should be small and have only one basin, but he ought to be lashed repeatedly and then banished.  This is not just our sink - nearly every kitchen design we have seen in catalogs and in furniture stores includes only one-sided sinks. In the place where the other basin should be is a slanted stainless steel shelf. Ok, we can place our dish-drying rack there and the water drains toward the sink. The water is so hard that I frequently need to use calcium-eating chemicals to clean that shelf. I'd rather have a second basin for rinsing the dishes!

I brought quite a few cookbooks and recipes with me from the U.S., and I never realized how many call for condensed cream-of-something soup. There are lots of soups here, but I haven't found condensed yet. I suspect that's because a good Swabian cook makes his or her own sauce with fresh ingredients and herbs rather than using something some machine in a factory mixed together.

Again, lots of American recipes tell you to use cooking spray. We use Butterschmalz (ghee), but I did use Pam a lot in the States and was used to it. It's quite convenient, especially when everything is ready to go into the casserole dish, which I forgot to grease.

If you've ever watched "The Holiday," you have seen Cameron Diaz driving down a narrow road facing an oncoming truck and wondering how they're both going to fit. Even though we drive on the "right" side of the road in Germany, the streets and roads are much narrower than is comfortable for me. I often hold my breath when a semi passes us, though I'm not sure how that helps.

Shoulders on both sides of the road 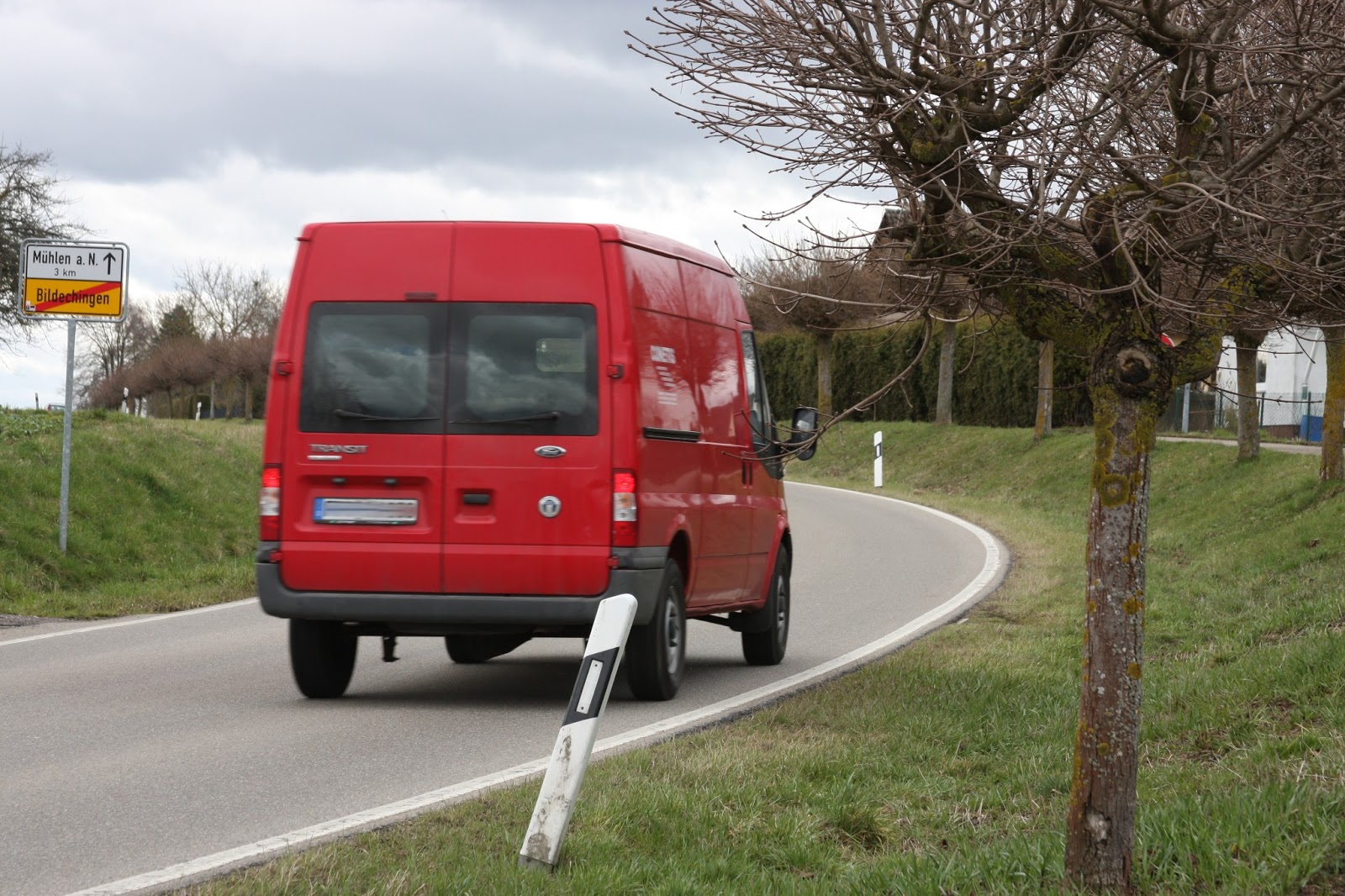 I have seen shoulders on some sections of the Autobahn, but only thick, short wooden poles on country highways where the  speed limit is 100 km/h (62 mph). So if I would edge to the right of the narrow road/lane to inch away from an oncoming semi or bus, I would slam into at least one of these poles. There is little wiggle room on Germany highways.
The photo on the right shows a country road rather than a highway. Clearly the pole in the foreground has already been hit at least once. The speed limit here is 70 km/h (45 mph). Martin says it used to be 100 km/h (62 mph), and it still is just around this bend.

The largest pack of bacon I have found in our usual store contains seven thin slices. I have seen something that looks like a chunk of unsliced bacon which I could cut myself, but I'd rather just pick up a pack of Oscar Meyer. I like thin bacon, too, but every now and then I want the thick stuff.

I checked today, and gas is down to about $8.06 per gallon here. Roughly 56% of that is gas tax. Martin can't fill the tank for less than €100 ($130), and we drive a car, not an SUV or truck. I would hate to see what the few SUV drivers over here pay to fill their tanks. I remember grumbling when gas went above $3.70 per gallon in Wisconsin...

We have all kinds of delicious, fancy cheese here, but the Wisconsin girl in me will never stop peeking in the gourmet cheese section (next to the one version of cheddar they carry) for squeaky cheese curds.
Posted by Ami im Schwabenland at 12:43