"Falconry is a life dedication, not a hobby."
~Martin Tyner 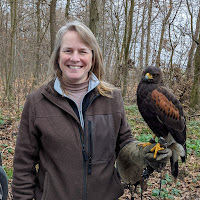 These days it is important to take some time away from the news – for those of us who are fortunate enough to be able to, who are not in the middle of the war zone, fleeing from home, or holed up in temporary housing not knowing when a return home will be possible. My heart goes out to everyone suffering in this war.

My escape, which is also planning for the near future, is books, videos, and documentaries about falconry. I want to list some sources I’m using, both in English and in German. Perhaps this will offer some inspiration for those who are new to falconry (like I am!) or who are still considering whether or not this is a passion they want to pursue.

From the links I've provided below you can usually find additional videos from the same falconer if you like what you see. For the falconers who have Youtube channels and multiple videos, I often provide links to one they produced about Harris hawks. This is because a Harris hawk will be moving in with us later this year.

This first link is a falcon-cam featuring a Wanderfalken (peregrine) pair at their Brutplatz (breeding site) in Nürnberg. There are periods of little action, but even watching Mama Falke lying there quietly warming her brood is a soothing timeout. I have seen several changings of the guard where Papa took over lying on the eggs while Mama went off hunting and to stretch her wings, and I was watching while she lay the third egg. The 4th and last egg was laid on March 4th, and by now all four eggs have hatched and feedings happen frequently!

This is a video compilation about crow hawking and hunting crows with falcons. There's music but no narration, and therefore you don't need to understand a particular language to see what Krähenbeizjagd (crow hawking) is all about.

This documentary is about a falconer in the USA, is in English, and gives a good and realistic view into the life of a falconer, the time commitment, the stress, the joy, and working and hunting with the birds. 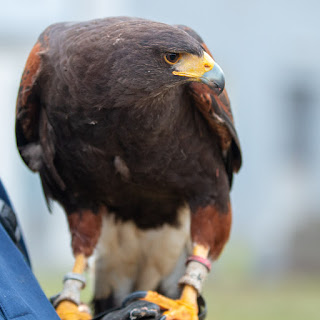 I follow this next master falconer on Youtube and enjoyed his book very much. Martin Tyner runs a wildlife rescue in Utah which focuses on birds of prey, but they take in other wild animals as well. He has recently done a series of videos about how to become a falconer, which I enjoyed. He includes plenty of important warnings about why one should not pursue falconry if one lacks time, money, and family support. Martin is calm, thoughtful, speaks nice and slowly and from the heart. It is clear he loves his birds and his work and in his videos he is usually with at least one bird - either sitting quietly on his glove or during training, for instance.

Here is Martin doing a falconry talk with Belle, his Harris hawk and wildlife ambassador. 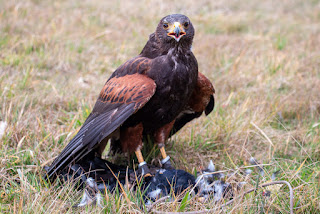 Ben Woodruff is another falconer in Utah, and I wonder if they know each other. Ben's style and personality are completely different from Martin's. He is more animated, is usually sitting in his room full of exotic Deko and doesn't normally have a bird with him. Like Martin's, his videos are full of important, helpful and sometimes fun information. In this video he gives an introduction to Harris hawks and in this one he explains many differences between Harris hawks and goshawks (Habichte).

Here is a young falconer from the UK who has made many videos about hawk care, training, health, and so on. He even did one about taking an online version of the US falconry test, which I found especially fun! It’s also good for me to hear the English falconry terms, for instance:

“furniture” is “Geschirr.”  The confusing part of that is that both are familiar words but have completely different meanings outside the world of falconry. “Furniture” translates to “Möbel” in German, and “Geschirr” translates to “dishes” in English*! In falconry, both words mean the equipment that the bird wears, such as jesses (Geschüh), ring, address ring or plate, leash (Langfessel), and so on.

*To be completely accurate, “Geschirr” also translates to “harness.”

You can find his videos on Youtube by searching for “Mercer Falconry.”

And you had to know I’d find a falconer in Scotland! This video shows Amy hawking with her baby, two dogs and her Harris hawk. She also has an adorable little Steinkauz called Hiccup! You can find all her videos by searching Youtube for “Falconry and me.”

Last of the English links, I found a video of hawk hunting with the Ohio School of Falconry, which begins with an informative talk about several different type of birds and then follows the falconers on a hunt. 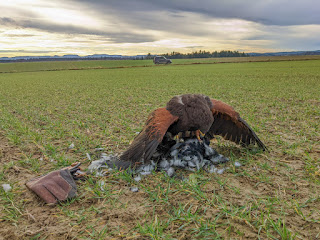 Posted by Ami im Schwabenland at 13:28