I might have saved a wee Turmfalke (Kestrel, a small falcon) today, at least from death under the wheels of some vehicle or being finished off by crows. For a falconer this is nothing remotely new, but this was my first time, so it has been quite an experience for me. 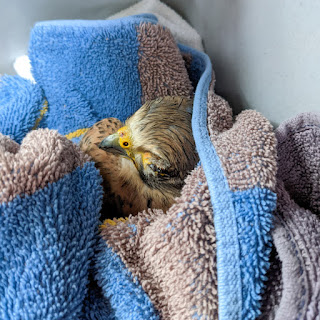 I was actually on my way to Hekate’s Voliere, because her falconer is in France on business and asked me to look after her. At one point I saw a small bird or owl right on the side of the road as I drove past. I have too often seen buzzards (hawks) too close to the road and feared for their safety if they should take off across the road in front of a car. This little one was way too close, so I screeched to a halt, parked off the road, grabbed my falconer’s glove and went over to shoo it away from the road. I crossed to the other side so I would approach it in a way that, if it could fly away, it would do so toward the field rather than the road. Then I saw a bus coming! I gestured to it to slow down and cringed, hoping he wouldn’t drive any closer to the right! The resulting wind knocked the bird over, but it was still alive. I crossed over to her (by now I could see it was a Turmfalke and was pretty sure it was a female) and saw right away that one eye was badly injured. She also couldn’t fly away, so she tried her best to scare me off.

I talked soothingly to her while she tried to fight me, gently grabbed her so her wings were against her body and her little talons were somewhat secured, and brought her back to my car.

For crow hawking I always have hand towels and a rectangular bucket in the car, so I swaddled her in the towel while she tried to bite and claw me, laid her in the bucket, covered her with another towel and wondered what the hell to do now. What a time for my mentor to be out of the country!

I sent her and M a message asking for ideas but drove to Hekate's Voliere, since I knew there was a vet's number there who deals with raptors. Hekate was clearly happy to see me, confident I'd be bringing her lunch. My mentor sent me the phone number of a falconer she knows who might be able to help, so I called him. He picked up on my second try, rather confused (and at work). Once he understood the situation, though, he told me where he was - basically back very close to where we live! I apologized to Hekate, jumped back into the car, and drove to where the falconer (Ron) was, checking every 5 minutes or so that the falcon was still alive. Ron had a look at her, determined the eye injury might not be so bad but her left wing was also broken, so there might not be much hope. There was still plenty of life in her as she tried to claw and bite Ron, who at one point asked me to pry one of her talons out of his hand.

We went to Ron’s van where he had a cardboard box, and as he opened the back he said, “I have a bird in here.” Sure enough, one of his falcons was sitting on her cadge on the floor of the van. The life of a falconer…

Ron put Kessie* in the box with the towel, and she just lay there, poor thing. He said he'd call a vet he knows who specializes in raptors, and he'd keep me posted. He warned me that a broken wing on a Turmfalke is usually too hard to repair because they are so small. And perhaps she would die quietly in the box - but at least it wouldn't be on the side of the road. I said I couldn't just leave her there, and he said he would have done what I did.

I drove back home to eat something and then returned to a confused but hopeful Hekate. She knows me well by now, but this was the first time I was with her alone. She came right to my glove, sat patiently while I fumbled to secure the jesses, stepped onto the scale like a good girl, and then when I released her back into her Voliere, she went right to the feeding perch and banged on the door to make it clear to me that I was to feed her. NOW. I really am like the staff. I serve her her meal (a yummy crow wing I’d kept in a plastic container in our fridge since Sunday), wait while she eats, and then I get to clean up the mess she made. Feathers everywhere. I should have taken a picture of that. The photo below is just what was on her food perch. The entire ground was full.

A few hours later I got a call from Ron, who said the vet was not put off hearing about the Turmfalke’s broken wing, and so there’s still some hope. I hope Kessie makes it! I will post an update when I know more.

Update: The Turmfalke / kestrel was humanely euthanized by the veterinarian after it was determined that nothing could be done for her.

Posted by Ami im Schwabenland at 20:58