There was an informative article in this month’s state hunting magazine about how to handle a visit from the Waffenbehörde (weapon authorities). I’m blogging about this to show how differently gun ownership is handled in Germany. What’s it like in Wisconsin? There is no national gun registry and there are no laws about how to store guns as far as I know, so what I’m going to explain here will sound utterly foreign to American gun owners from the very first word. 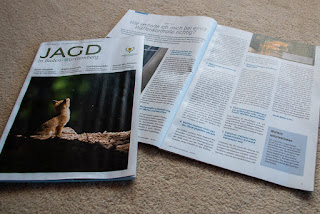 The German gun law (Waffengesetz, or WaffG) allows certified officials to show up unannounced at your door – if you own guns – and check that you are complying with the law and properly storing them. There is a national gun registry in Germany, so authorities know where the legally owned guns are or should be.

At the same time, this is Germany, and spontaneity is not really a thing here. It's unlikely anyone from the Waffenbehörde would waste their time going from gun-owner-door to gun-owner-door on the off chance the gun owners are home. Of course, a spontaneous check is more to the purpose. If we're ever subject to one of these, I'll update this post.

Despite my title for this blog post, the article emphasized that the officials who come for this purpose have zero sense of humor. While Americans think Germans lack that anyway, this is really not a time for any attempt at being funny or getting them to smile.

Parts of this law changed after one school shooting in Winnenden in 2009. One.

What if the gun owner is not home?

If the gun owner is unavailable, the appointment must be rescheduled. The spouse or children of the gun owner are not permitted to even know the combination to the safe or the location of the key, so if they allow the authorities access to the guns, the gun owner has already gone against regulations and could risk the confiscation of his gun license, hunting license and guns. This, for instance, is one change in the law since the school shooting, in which the shooter knew how to get to his father’s legally-owned guns.

Rescheduling the appointment will not damage the gun owner’s *Trustworthiness* (one of the requirements for gun ownership), but repeatedly doing so could.

Just as with any visit to your home of a uniformed person requesting entrance, the gun owner should first check the I.D. of the controllers. If there’s any doubt after checking their badges or I.D. cards, the gun owner should call the Waffenbehörde (weapons agency) before letting them in.

Satisfied that the controllers are who they say they are, the gun owner should show them to the gun safe by the most direct path possible. They have no business in any other room or location in the house and are not allowed to search any other place or objects other than the gun safe.

Checks are not allowed to be made on Sundays or holidays, or between the hours of 22:00 and 6:00.

What will the authorities check?

It is legal in Germany for a hunter to borrow a gun from another hunter for up to a month without paperwork such as an Überlassungsvereinbarung. However, at the check if there is a gun in the safe that is not on the owner’s WBK and there is no paperwork, this will lead to questions and hassle.

Proper storage of guns and ammunition

Depending on the type and number of guns and ammunition, these must be stored in a locked gun safe or case (the locked case is only for Luftgewehre or air guns). The gun safe, if purchased after July 6, 2017, must be a minimum of security grade 0. The guns must be completely unloaded, as in no ammo in the chamber or the magazine.

The boxes of ammo may be stored in the safe with the guns as long as the safe is security grade 0 or 1.

Not only can the Waffenbehörde show up at your door unannounced to check that you are properly storing your guns, but they can also charge you for the experience. The federal law states that the fee has to be reasonable in regard to the tasks performed, but it does not state what the fee should be – that is determined by the county. In our county the charge is €50 + €5 per gun, with a maximum of €75.

And now for a little Aprilscherz fun, the article below appeared in the current April 1st edition of Wild und Hund. In an attempt to reformulate “Waidmannsheil” to be more inclusive to hunters of all genders, the Gender Commissioner of the federal government has released a statement that the traditional hunter's greeting and congratulatory salute should be “Waidmenschheil!” from now on. 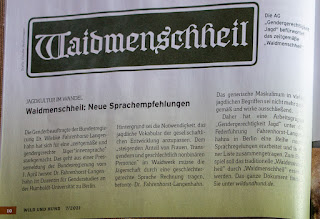 I totally fell for it, but M thinks it's an April Fool's prank. I guess we'll see two things in the next issue:
Posted by Ami im Schwabenland at 16:05