The Revenge of the Duftkerze

I love Duftkerzen (scented candles). I'm picky about the scent and don't like them all, but in general I enjoy a gentle scent in the house despite the Feinstaub (fine particle polution). M hates them. Hates. He does not throw that word around lightly and would only use it toward someone who would do his family harm. And Duftkerzen.

Some days after his lunch break I will light one for an hour or two, and when he comes home two or three hours after I've blown it out, I hear him open the door, walk over to change his shoes to Hausschuhe, and snort. He knows. When he finds and greets me he snorts again and asks, "Did you light a Duftkerze?" "Yes, but I blew it out three hours ago!" Still...he knows.

I know this about him and I accept it. But sometimes I still need to light one because they make me happy. Especially lavendar, rosemary, sandalwood...Natural scents, not fake flowery, soapy, or fruity ones. But to him it doesn't matter what they smell like. They're all bad. 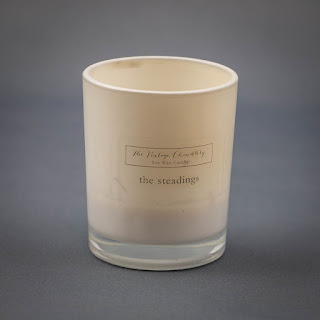 Last week wednesday early afternoon I lit this lovely little candle in the bedroom. I blew it out an hour later and thought it just added a nice subtle scent. I waited for M to say something about it when we went to bed, but he didn't. Whew.

The next afternoon I lit it again but forgot about it. It burned for about three hours. Ok, fine...I blew it out when I remembered, and we had a good seven hours before bedtime so I opened the window.

We needed to be up earlier than usual the next morning because I had an excursion and M needed to drive me to the Park & Ride before work, so we went to bed a bit before midnight. Oh. My. God. The bedroom stank so strongly of that damn Duftkerze I feared retribution. I like its herbal scent! But it was still way too strong after seven hours despite the open window. It could have covered the scent of a corpse.

I got into bed before he did and pretended to be asleep when he opened the door. Then I lay there awake for three hours feeling guilty. Was the scent somehow meant to revitalize rather than relax? He couldn't sleep either, judging from how much he tossed around. I tried burying my face in my pillow, but I couldn't breathe. I threw the duvet over my head but it got too warm. I thought about fleeing to the living room sofa, but I figured I should suffer with him since I'm the fool who'd lit the damn thing and forgot about it. Sometime after 3:30 I finally fell asleep.

In the morning M wordlessly moved our air filter (which we normally turn on in the dining room after we've cooked tacos or fish) into the bedroom and turned it on volle Pulle (full blast). I returned from my excursion mid-afternoon, and by then the room smelled like worms on a rainy day. Probably the air filter was trying to kill itself. I turned it off and opened the window.

An hour later I went back to check things out, and the candle smell was back! OMG...I think it got into the walls and the bedding. I started pondering what to do. I could...


With M, Reason returned home while I was trying to figure out how many weeks it would take us to organize the junk in the Keller to get the house ready for showings, and he assured me we don't need to move. What we needed was proper Lüften! Open up all the windows and doors in the entire house and exchange the air. Force that heinous Duftkerze smell out. It was a damp evening, though, and that's more of an afternoon thing. We did some mini-Lüften and hoped for the best.

That second night was slightly better. At least we didn't lose more sleep. The next day we did our Lüften properly like good Swabians, and it improved some more. It took several days, though, before the stink of that discourteous Duftkerze faded completely.

I can tell you this - I have sworn on my dead Sheltie's soul that I will never light another Duftkerze in the bedroom again, and it will be a good long while before I light one anywhere in the house. I've learned that lesson well. To his credit, M didn't give me any more grief about it than I gave myself. A lesser man and most women would be rubbing my nose in this misjudgement for weeks, no pun intended.

By now the bedroom is back to normal, the Duftkerze was evicted right after its photo was taken, and I have banished all my other Duftkerzen, scented soaps and Christmas incense cones to the basement. 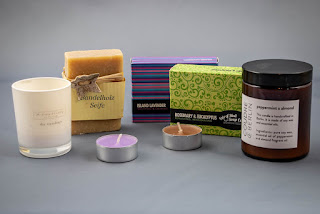 Posted by Ami im Schwabenland at 11:58