The answer to the question "Why should I learn German?" may seem obvious when the person asking is living in a German-speaking country. Apparently it isn't, though, judging by the number of people from various countries who post questions on expat-Germany forums asking, "Can I find a job in Germany that pays a good salary if I don't speak German?"

Such a person may be able to find a job here in a company or school where speaking only English works for that person, but what about all the time spent not-at-work?

On the surface or basic level, anyone can come up with reasons for learning and speaking confidently the language of the country in which they live. Grocery shopping is easier, you can ask for help when you need it, you can follow signs in a department store to find what you need... But there are other benefits that reach to a deeper level, which one might not think about - especially before moving to that country.

These are areas in which I benefit - almost daily - from being able to speak and understand German. My inspiration for writing this post is #10. In case I've been too long-winded and dull, you can just skip to the end.

If you've followed me for a while, you know I hate driving here, at least out of our community. However, when M and I go somewhere, he drives because he likes public transportation about as much as I like driving on the Autobahn and country roads. For those who drive here, being able to understand the Verkehrsfunk is helpful essential! You're on the A8 driving from Pforzheim to München, and you just heard there's an accident involving two semis and six cars just shy of Stuttgart, and the Autobahn is shut down. Get off the Autobahn and find another way! If you can't, then make damn sure you form a Rettungsgasse!

The Verkehrsfunk will tell you how long the Stau is and often how much extra time you need to factor into your Fahrt (drive - giggle giggle). If you don't understand German, when the Verkehrsfunk busts into your favorite song you'll be left wondering what the hell is going on - both why some dude has interrupted your radio program, and why suddenly all the cars are slowing down, pulling way off to the sides of the road (left lane to the far left, everyone else to the right). Here's a hint - they are not clearing the way for you to get a free lane to Singen.

I can understand the news (most of it, anyway) from German sources, which expands my exposure to what's going on in the world. This is especially important for events that take place in Germany and Europe! I would not want to have to rely on English/American news to find out details about what is going on here.

I can read and understand the local (news)paper and online reports (Blaulicht), which are simply not available in English. If I want to know about events scheduled and happening in my small community - many of which are opportunities for meeting people! - I need to be able to read and understand German.

When I visit a town I haven't been to before, I want to be able to read about it to learn what I should see and do. Before I go to see a major attraction or a castle, I'd like some information about it beforehand so I know what is special about it. There is much more detailed information available about things and places to see in Germany in German. Compare the lengths of these two Wikipedia articles about the town of Esslingen - here's the English, and here's the German. Yah, yah, size doesn't matter. But information does.
This article about the Swabian Kehrwoche isn't even available in English!

I can deal with most of my problems (appointment making or rescheduling, health insurance issues, shopping, returning a defective item...) myself without having to ask M for help. This is huge for someone who wants to be independent and not helpless!

I can also apply for a job, quit a job, and communicate with my colleagues.

I can understand unexpected announcements on the train and not panic. For instance, on a trip to Esslingen once, the conductor announced that the track between Herrenberg and Böblingen was shut down because of "Personenschaden" (someone had thrown himself onto the tracks in front of an oncoming train), and she told everyone where to find the Ersatzbusse (replacement buses) that would transport us from Herrenberg to Böblingen via a detour.

I can also explain to other confused passengers when the conductor announces on the approach to Eutingen that the train we're on is going to split in two, and if anyone is on the wrong half of the train, there will be time to switch at the next stop - in case they didn't understand this sign:

When I'm reading an English book and come to a new and unfamiliar word, I can often look up that word on my dict.cc app (the only app I actually use on my smartphone) to find the German translation, which usually makes the meaning clear. I do this not infrequently; just the other day I came across the word "apostasy," and the German translation (Glaubensabfall) cleared it up for me.

I can cook with German recipes, which means I always find the required ingredients. I learned early in my expat life that American recipes usually do not work in Germany. Everything tastes different, and some ingredients just can't be found here.

I can also take part in Kochkurse (cooking classes) here!! M and I have enjoyed doing those together. 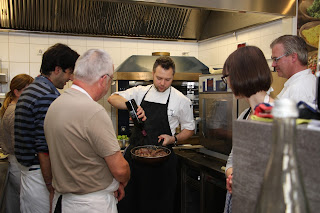 I have had several opportunities to offer assistance to someone who was struggling and confused because they didn't speak German, and the person to whom they were appealing for help did not speak English (at least not confidently). Despite what you've heard, everyone here does not speak English. Many people do, and at typical tourist attractions employees are likely required to, but there are no guarantees. I do not generally approach or speak to people here who are speaking American English, but if someone clearly needs help, I'm happy to offer it.

This is also how I came to know some very special people, whom I am honored to call my friends. In 2015-16, many refugees came to Germany being able to speak English, but no German. I got involved locally and have had some of the greatest teaching experiences of my life.

Being able to read and understand German has allowed me to read books that are only available in German! A new one arrived yesterday noon about photographing owls and birds of prey, and I read all 320 pages by this afternoon. The craziest thing is that I have struggled to understand and retain a few certain camera functions and settings - having read plenty of explanations and books in English - and finally with this book it's sinking in! 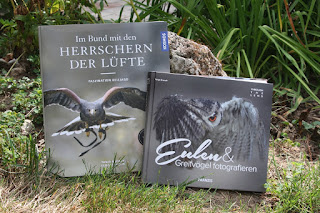 The book on the left is a new one about Falknerei (falconry), and also fascinating. 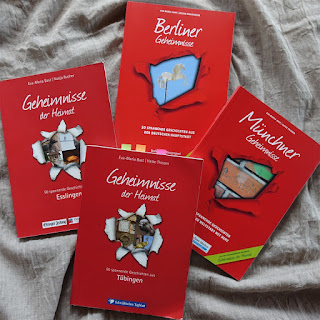 This series is also a favorite of mine - "Secrets of Home." The writers explore 50 different lesser-known stories or secrets of a town, revealing very interesting details - and the books are not available in English! I first came across the one about Esslingen three years ago, then the one for Tübingen, and seem to keep adding to my collection. Without this book I would not know some fascinating details, which I now include in the tours I give.

I can follow the conversation M and his English mother are having, even when they randomly and unconsciously switch back and forth between English and German!

What about the rest of you?
What benefits have you seen from learning the language of the country in which you're living?

Posted by Ami im Schwabenland at 23:31