Could you become a German??

I don't put my birthday on social media because I don't want anyone wishing me a happy one just because a machine told him or her to do so. However, I turned 49 this year, and what was one thing on my wish list? This game... 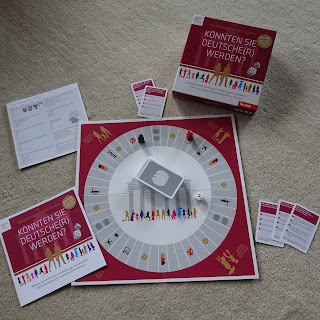 This board game is based on the 330 questions that make up the Einbürgerungstest, or German citizenship test. Each card has one of the actual questions from the test, the four multi-guess possible answers, and the correct answer. Players roll the die and move their little Spielfigur around the board, answering a question on each space they land on. When a player answers a question correctly, he keeps the card. The first player to collect 17 cards wins.

Why 17? For the actual Einbürgerungstest, takers need to answer 33 questions (30 about Germany in general and 3 about the state in which they are taking the test) and get at least 17 correct. That's 51%. 59% was a failing grade in the school I taught at in Wisconsin. Happily, the majority of my students have scored very well on the test - most 90% and higher.

There are special spaces on the game board, indicated by several symbols.


Since November 1st is a holiday in Germany and M didn't have to go to the office, he agreed to play a round of this game with me that morning. It could definitely be fun, but since both of us knew all the answers that came up, I guess it was a little dull. 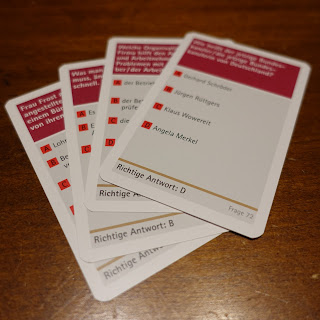 What livened things up was that I kept landing on the special spaces - and NOT the good ones! In no time at all M had amassed seven cards, and I had only two! After I grumbled good-naturedly (I'm possibly the least competitive person in the world), with my very next roll I landed on the Gerichtsfeld and had to give up one of them! I protested when I landed on the "zu spät" Feld, because I would NEVER be late for something as important as a test! (In truth, I would rather be an hour early than five minutes late to anything. I just find a quiet spot and read the book I always have with me.) But how appropriate for a German game that a player gets punished for the very idea of being late.

In the end we actually both counted up 18 cards, but M had got there first.

I had to laugh every time M said, "Why the hell does a foreigner need to know that?!" For instance, since which year have we been paying in cash with the Euro? What possible need could there be for a Syrian refugee or an immigrant from Scotland to know that? It's enough to know that we pay in Euros now. Who cares "since when"?

Here are two more: What is a Gerichtschöffe and who can be one? Well, that's a special assistant to a judge who needs to decide on a case. It's kind of like a jury member or volunteer judge, but there are only two of them who listen to the evidence and give their inexpert input. Who can be one? Not a foreigner, unless she is naturalized and speaks/understands German at the level of a native speaker.

Having taught the Orientierungskurs twice now - and my third course will start in December - I am very familiar with the 330 questions and answers. And I'd like to suggest the gang of sadists who came up with those questions be tarred and feathered. Some day I'm going to go through those cards and make a pile of questions I consider important enough that someone applying for citizenship should know just to see how many are cruel. The writers of the test should each receive three lashes for every unnecessary question.

I like the fact that there's a game available to practice for this test, and it could be a fun party game for a mixed crowd of immigrants who have taken the Orientierungskurs and Germans. Too bad we don't have parties. Obviously I plan to use it in my class.

In other news, I'm nearly wetting myself over the new pile of thick books I have to read. 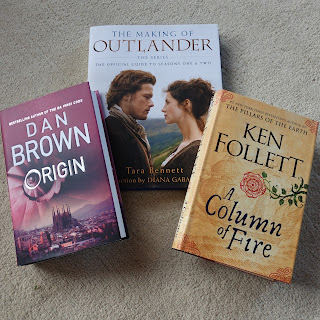 My head is spinning because I don't know which one to start with. To make matters worse, I am smack dab in the middle of a 600-page book about Katherine of Aragon, and this would be a dumb time to stop in order to start on a different really long book - or two! Dan and Ken should really plan this better and publish their new novels six months apart and when I have time to read them. Poor me with my First World problems...

I just found a box of civics questions for the US citizenship test. I might put that on my Christmas wish list! I'm a sucker for trivia games.

Have you found any good trivia games lately?
Do you enjoy playing games that show you how much you still have to learn?!?

Posted by Ami im Schwabenland at 02:00