Shortly after Christmas my daughter mentioned it would be nice to take another family trip to Scotland, and 24 hours later we'd started looking into accommodations. She (Steph) and my son (Al) were together playing cards at a relative's house in Wisconsin, and we were chatting online. At one point I sent a private message to my daughter and told her to ask my son if his girlfriend (Liv) would want to join us. She laughed and wrote "He literally just asked me how to ask you if Liv could come along!" She said she could pay for her plane ticket, and so we became a group of five adults.

M and I would fly from Stuttgart, Steph would fly from Newark, and Al and Liv from Chicago. We actually found flights on three different airlines arriving in Edinburgh within two hours of each other - and departing within about three hours. We hadn't expected that!

M went through ADAC (the German automobile club) to book a guaranteed Mercedes SUV with unlimited miles and paid several hundred Euros for that guarantee. Unfortunately their supplier (the rental car company) didn't honor that guarantee, so we ended up with a Range Rover Sport with a mileage limit, but more on that in another post. The most important thing was that we and all our luggage fit, plus the groceries we picked up at the Tesco in Oban. It was a tight squeeze, but it worked - though I'm glad as hell I didn't have to drive it!


We'd learned that Liv tends to get carsick, but it just happened that we would never be on the road for more than 90 minutes at a stretch as long as traffic cooperated and we didn't make any wrong turns. M had pre-programmed Katja (our GPS/Navi) with all the addresses we needed, and except for a few times when she played silly buggers with us, taking us down a road M would have rather not traveled, she served us well.

Packing was another challenge. Liv is an over-packer, so my daughter told Al they'd have to pack in one suitcase. I think he had 7 cubic inches of space to call his own, plus a duffle bag he used as a carry-on. Steph has traveled internationally often enough to be able to pack lightly, but her suitcase was still a good size. At the last minute I decided to switch from my normal suitcase to a large carry-on, because I am the queen of packing lightly, especially when we're going somewhere with a washing machine. And yet I still had two shirts I never wore (one was a tank top - go figure.).

For our week on the Isle of Mull we'd booked a self-catering flat, where we planned to prepare breakfasts, lunches, and most dinners. That required a stop at Tesco in Oban (already programmed into Katja from our 2015 trip) to get everything but meat and milk products. We were already crammed in the car, but everyone besides M took a bag at their feet or on their lap. 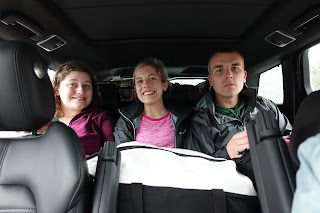 After Tesco we parked the car in the ferry queue and went for fish-n-chips, which we ate on the pier with eager seagulls hovering about. Then it was onto the ferry and across the bay and through the Sound of Mull to Craignure, passing the seat of  the MacDougall clan, of which we are a small part.

Islanders will scoff at us, but coming back to Mull is for us returning to a fond and familiar place. There is no place we would rather vacation than here. The road is familiar, and M almost looks forward to the single-track roads, where the driving system is a bit scary at first (for me, not him), but logical. You don't always have the road to yourself, but the locals are as patient as they can be.
By the way, faced with the above situation, no, you cannot "just" anything. Honk, shout obscenities, drive slowly forward, drive around them, "shoo" them along, herd them off the road with your car... You wait until they are damn good and ready to amble off the road. M learned a few trips ago that backing up the car just a bit can help. That apparently sends them the message that you are not a threat. Then they just give you a look of disgruntled disdain and finally cross the road.

In the next post I'll tell about our three accommodations, all of which we highly recommend!