Goodness gracious, it's been nearly three weeks since I last published a blog post. It's a good thing I don't have self-imposed deadlines for these, because I'd fail miserably.

You might have seen on my last post that my dad arrived in April to spend four weeks with us while taking a German course at the local language school. That time flew by, and he's gone again, sort of. At the moment he's in Esslingen with a delegation from my hometown including the mayor, members of the Mayor's International Committee, and People to People members who have come to celebrate the 50th anniversary of the Städtepartnerschaft (Sister City relationship) between the two cities. The group, which also includes my mother, arrived yesterday and was treated immediately to a delicous lunch with Esslingen's Oberbürgermeister (Lord Mayor).

After lunch the group was taken to the Merkel Park for the planting of a Sugar Maple tree (the state tree of Wisconsin) in honor of the Golden Anniversary.

So that's what we were up to yesterday. Oh, and I was seated at lunch next to the Oberbürgermeister to act as a translator as needed (not often) while he chatted with Sheboygan's mayor, who was seated on his other side. My Schwiegermutter, who usually sits there to help, gave me the honor this time so she could concentrate on her other duties for the group.

But what about the four weeks my dad was staying with us?

My dad's class schedule was Monday, Tuesday, and Thursday 9:00 - 15:00 with an hour lunch break, and Wednesday & Friday 9:00 - 12:30. Most days after class he spent anywhere from one to four hours doing homework and studying beyond what was covered in class. He was a very determined student! I was able to answer every grammar question and most of the vocabulary questions he had, and he surely learned a lot in those weeks - including that it takes longer than three weeks to become proficient in German. A woman who joined his class several times actually dissolved into tears one day!
I had started out this post with the title "All the Things We Didn't Do," but during the time when he wasn't in class, doing homework, or catching up on news from the Homeland, we actually did do quite a lot!

We didn't need to do any touring or sightseeing because he's been to southern Germany often, but having not spent a ton of time in our local area, there are some lovely little villages I'd intended to show him - Herrenberg, Nagold, and maybe Rottweil. I also meant to take him for several walks around our home - through the valley, along the Neckar, around the perimeter of our village, to the Biergarten and back, and to the bakery in Eutingen.

The weather during almost his entire stay was typically German crappy, cold, and wet with several mornings of frost, and it didn't inspire us to feel the walkies. We did hoof it to the bakery once and took a long walk through the valley on the first nice day, but that was it for real walks. We did also stroll to one end of the village to take photos of the gorgeous Rapsfelder, because we'll walk anywhere for beautiful photos.

Besides that, though (in May because I already covered what we did in April), we drove to Esslingen to meet this year's exchange students from Sheboygan, went to the Sprachcafé twice, went out for dinner a few times including to the Eisenbahn in Nagold and of course our favorite restaurant (Straub's Krone), ate most of our meals at home because M and I love to cook, and went for a Mother's Day stroll to get photos of Horb and our little piece of the Neckar Valley. 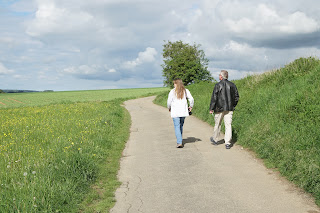 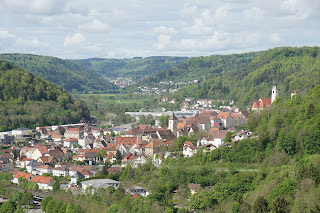 My dad also joined us for a Kochkurs at Straub's Krone! Here he is schnibbling herbs for the Wan Tan (wonton) filling. 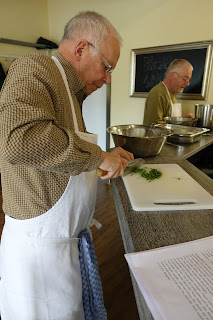 He and I watched the musical "Elisabeth" together, which is about the life of Kaiserin Elisabeth ("Sisi") of Austria-Hungary, and all three of us watched "The 13th Warrior" and "Idiocracy." My dad was shocked and dismayed by all the correlations between that last movie and what's going on in the Homeland today. The movie, which came out in 2006, was supposed to be a satire, but it turns out to have been more of a documentary of the future.

Finally, we enjoyed many a Feierabend together, outside on the terrace when the weather played along, and in our Wintergarten when it didn't.

Now M and I have Sturmfreie Bude, which is a term normally used when teenagers have the house to themselves because the parents are away for the weekend. In a bit over a week (after my parents return from Salzburg and Vienna) my dad and I will chaperone the three Sheboygan exchange students on a short trip to Berlin, and then both my parents will come back here for five days before returning home to Wisconsin.

What has been keeping you busy lately?!?

Posted by Ami im Schwabenland at 10:48