Sorry for my absence. I've been spending a lot of my spare time keeping up on the news, and that's a tall order these days. I haven't decided if doing so falls under the topic of education or entertainment. Whenever possible I watch the raw footage of speeches - either Sean Spicer's press conferences or the Tweeter-in-Chief's fantastic rally speeches and addresses to groups gathered around his conference table such as this gem to kick off Black History Month. He gives the best speeches. Everybody says so.

I've mainly been teaching and lesson planning during January and February, so there hasn't been a lot to write about. Nevertheless, I'll scrape together a few highs as well as a low or two. 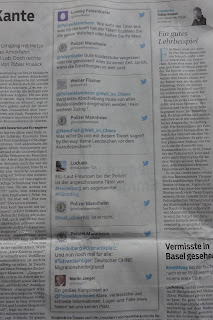 What were your recent highs and lows?

Do you have some exciting plans coming up?

Posted by Ami im Schwabenland at 16:09