Most tourists who come to Germany visit the well-known castles and palaces - Neuschwanstein, Linderhof, Nymphenburg in München, Charlottenburg in Berlin... Many visit castles along the Rhein as well. They are expensive to visit, but it's nice to see how the upper crust lived many years ago. I don't begrudge anyone wanting to see these castles and palaces, but I am glad I will not ever again need to visit the over-rated Neuschwanstein, having taken enough student groups there over the years.


Personally I prefer the castle and fortress ruins - the more rustic and ruined, the better. They each have a history, sometimes steeped in mystery, leaving visitors to use their imaginations.

Many ruins are free-of-charge, and others charge a nominal fee to help with upkeep and maintenance. And they're all over, at least in southern Germany.

Within walking distance of our home not long after I moved here, we found Ruine Eutingen. To learn about the more remote ruins, you need to know German because they are not tourist attractions and little or no information is available in English. This Burg (fortress) was built in the second half of the 13th century and was the seat of the Lords of Eutingen. It was destroyed by Graf von Hohenberg in 1350 but eventually rebuilt, changed hands a number of times over the centuries, and abandoned and sold off in 1818. Today one can find the remnants of a tower and wall, a cellar vault, rounded window arches, and Schießscharten (arrow slits). 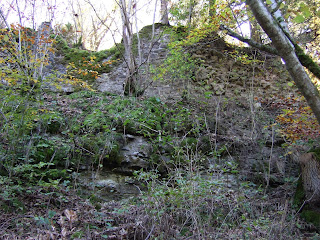 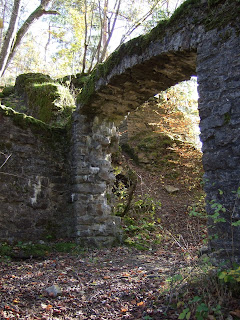 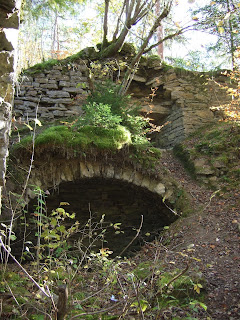 This turned out to be a nice afternoon's walk and adventure on my birthday a few years ago, because although we knew about where it was, we had to search and backtrack a few times before we found it hidden on a hill among the trees.

When fellow blogger Adventures of La Mari and I decided to meet, we chose the ruins at Hohentwiel near Singen. Our husbands and their pug Abner joined us to explore the ruins. This one is well-enough known that info is available in English. The first castle on this site was built in 914 and first served as the seat of Swabian dukes. 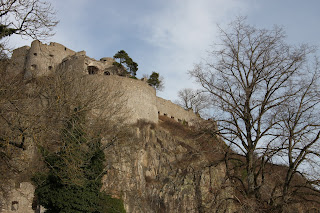 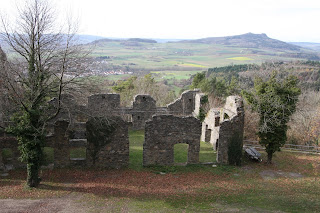 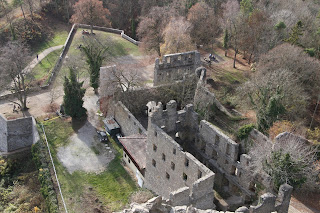 My Schwiegermutter enjoys exploring ruins as much as I do, and we made an excursion together to Klosterruine Hirsau, near Calw. The origins of the monastery go back to 830, and in 1091 the large church was built. These ruins are an architect's delight, with clear and preserved examples of Romanesque and High Gothic windows and elements. 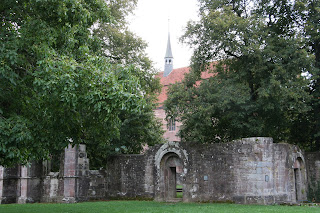 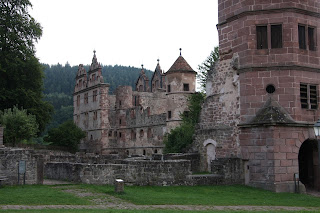 Some might see all this as piles of rocks, but I see Germany's romantic and turbulent past. And part of the beauty of southwestern Germany for me is that whenever I have time, I can check out a new one or visit an old favorite. They are easily accessible by train and bus, and an extra bonus is often a lengthy walk or climb to get there from the station, which is about the only exercise I ever get.

Nagold is a beautiful little town not far from us, and the ruins on the hill above town are worth the forest climb.


Although I haven't visited them yet, we did pass below the ruins of Hohenurach on a walk to the Urach waterfall on a lovely autumn day. I'd rather wait until the renovations are finished anyway. 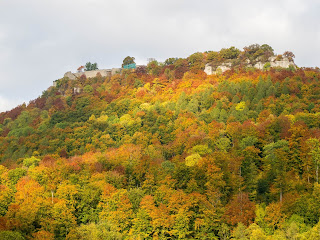 With the exception of Hohentwiel, none of the ruins I've mentioned charge an entrance fee. Even Hohentwiel costs only €4,50, while Neuschwanstein will set you back €13, which doesn't include all the tourist crap Gedöns bits and bobs you'll be tempted to buy in the shop.

Let that stand as the fifth thing I love about living here in southwestern Germany, though there are plenty of ruins in other parts of the country as well.

For more on this thread, see:
Beautiful Towns
Landscape
Food
Holidays
and
Wegkreuze