The Rest of the Story

My absentee ballot is in the mail on its way to Wisconsin. Whether it makes it to its destination and is counted is out of my hands, but at least I've done what I can.

Just as a quick re-cap, I signed into my account and printed my absentee ballot from the MyVote Wisconsin website. Along with the ballot I printed the official certification and the instructions. This is when I discovered that, thanks to Wisconsin's new Voter ID law, I now need an adult U.S. citizen to witness the filling out of an absentee ballot. The closest American I know is in Stuttgart, and although she kindly offered to be my witness, I was slightly vexed that voting absentee was going to cost me time (several hours to get there and back) and money (€20 for the train).

At the suggestion of friends and acquaintances and with a few ideas of my own, I contacted:

Each contact ended up fruitless, though the people who know me personally sent me additional ideas as they thought of them.

The end of the story is this: M and I spent last weekend in Breisach on the Rhein, and on the off chance that I would bump into an American, I brought my ballot and all the other papers with me - including the page of Act 261 concerning the witness to prove that "if the certificate is missing the address of a witness, the ballot may not be counted."

After checking in at the hotel on Saturday afternoon we headed toward the Rhein, where there are often river cruise ships docked while their passengers explore the pretty little town and the Münster. I eavesdropped on each group we passed but heard mostly German. Finally from a slight distance I spied a couple who looked American. I don't know what it is, but somehow Americans are usually easy to spot. The man had what looked like a DSLR camera, and the woman was calling to someone on one of the ships. I approached the woman and asked if she is an American. Bingo!

She was willing to witness my ballot, sign her name, provide her full address according to the instructions, and even to have her picture taken with me! 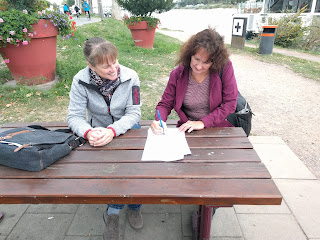 The deed was done, she gave me her email address so I could send her the photo, and she's got a funny story about meeting a strange American in Germany while on her river cruise.

Interestingly that very day an article appeared in the Milwaukee Journal that thousands of absentee votes might not be counted because they lack the witness' complete address. How could someone neglect to write his or her full address on the form, you might wonder? 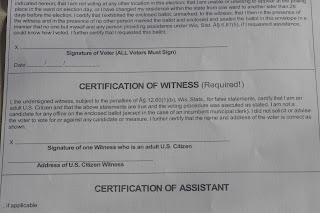 Although apparently these forms vary across the state (explain that one to me), my form is deceptive, and was probably designed by an intern. The single line for the witness' address is shorter than the signature line. Every form I recall having seen provided two lines when an address was required. Until this new Voter ID law, the ballots were accepted with only the street address.

In addition, there is no line for the witness to include her date of signing. Only on the instructions does it say "One adult U.S. Citizen must witness you mark your ballot and sign and date the certificate." (emphasis mine)

The certificate is deceptive in another way as well. Under the voter's signature is a line labeled "date." Again, almost everything I have signed requires the signer to include the date of signing. That is logical, and that is what I would understand with the label "date." The instructions, however, say "Be sure to sign the certificate and provide your date of birth in the presence of your witness." (emphasis mine)

So on the certification no date of signature is required? That seems odd. The designers of this law are supposedly so terribly afraid of voter fraud, yet without the dates of signature, how can they be certain the witness actually witnessed and signed the certification according to the instructions? The state has already announced that ballots without full addresses won't be counted - has no one noticed the issue with the date of birth vs. date of signing?

I wrote to my "state legislators," but of course I don't expect to hear from them. I'll post an update on this post in the unlikely event that I do.
Um...awkward update: I just read that one of those two legislators died yesterday.

Update 2: an aide to my remaining representative responded moments ago with an email confirming that it is true that I need a witness (which I clearly already knew) and wished me luck finding one. She also added another requirement that does not appear in the instructions or on the ballot: the witness' signature must be legible. My ballot is already in the mail, so it's lucky that my kind witness had beautiful handwriting - I had even complimented her on it. I don't know about you, but I know plenty of people whose signatures are not legible. I guess if that's an additional requirement they should also include a space for the name to be printed.


I want to mention before I end that on Monday I was contacted by a professor in Tübingen who said he would be happy to witness my ballot, and I also received a phone call from a woman who'd received an email from the DAI about my problem. She would have also been willing to meet me in Tübingen to witness my ballot. I will therefore have plenty of options for next time and just need to remember to start the process early enough to give people time to respond before I get nervous.

In celebration of this saga ending, I baked banana bread today - a typical American treat that Germans find a bit odd. Strangely, I don't like bananas all that much and the smell of them makes me gag. But banana bread (including the smell) is somehow delicious - especially warmed and with butter.