In the News V

Goodness, it's been more than a year since I wrote one of these posts! Today, though, M told me about a story he heard on the radio that reminded me of this thread. 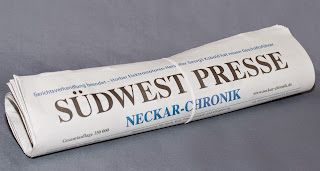 A 31-year-old man from China had his wallet stolen while in Stuttgart, and instead of going to the police, he mistakenly reported to "a different office". The officials there couldn't speak Chinese and he couldn't speak German or English. They sent him to Heidelberg to a registration center - for refugees! At the center he followed the officials' instructions gestures and filled out an application for asylum. From there he was brought to Dortmund, and finally to the housing facility for refugees in Dülmen. He had to surrender his passport and visa.

Only in Dülmen did someone happen to notice that he was very well dressed, and something didn't seem right about his situation. A helper with the German Red Cross saved the day by going to a Chinese restaurant for help. Someone there recommended they try a language app to translate between German and Mandarin. Wah-Lah*!!

It turns out he was a tourist and had planned to travel further to Italy and France to see places of interest. After two and a half weeks and additional confusion with the horrifying jungle that is Germany's bureaucracy, the man's asylum application was canceled and his passport and visa were returned to him.

Eventually he was able to resume his trip.

In the Netherlands last June a hedgehog nearly met an untimely end. The prickly fellow came upon part of a broken bottle with a fair bit of egg liqueur in it, and apparently attempted to quench his thirst by lapping up the spirits. Someone noticed the hammered little tramp lying in the road, so drunk he couldn't roll himself into a ball - which is how hedgehogs protect themselves.

The passerby notified the humane society, and Mr. Hedgehog was taken to a cell to sober up. 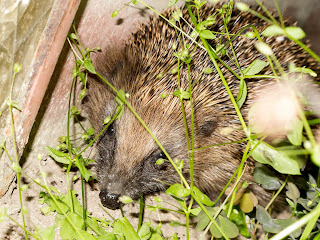 And Speaking of Hedgehogs...

More recently the noises of two amorous paramours irritated an Erlangen resident so much that he called the police: he was hearing heavy panting somewhere outside his house. The authorities showed up and discovered a pair of love-crazed hedgehogs under the man's front steps. The little couple had been going at it in the cozy spot for twenty minutes. A hedgehog expert reported: they commonly hiss and snort loudly during their hours-long coitus ritual, and the male makes the most noise of all.

Have you heard any good stories in the news lately??

*My husband, whose French teacher once said to his mother that he just needed a kick in the arse once in a while, tells me it's spelled voilà.  :-)

Posted by Ami im Schwabenland at 21:26