Yesterday was Allerheiligen, or All Saint's Day, which I wrote about last year. It's a day to remember the saints we honor throughout the year on their feasts days. Today is Allerseelen, which is a day to honor and remember the regular souls who have passed away. These are both Catholic days, and though I'm not Catholic I live in the predominantly Catholic south of Germany, so yesterday was a stiller Feiertag. With today being Sunday, southern Germany is essentially closed for business the whole weekend. Restaurants and museums are open as well as most gas stations along the Autobahnen, but I had to make sure the grocery shopping was done by Friday.

I should mention Friday as well - that was Reformation Day, which of course is a Protestant holiday. In most of the northern states that is a holiday, so they had a long weekend but could do their grocery shopping on Saturday.

After having a nice lazy morning, one of us came up with the idea to go for a walk to some nearby Burgruine (castle ruins) which we've known about but have never searched for. We've made a mental note to wear our hiking boots next time we go exploring.

The castle has some history, of course, but it's a little dull so I'll only mention that it was built in the second half of the 13th century. 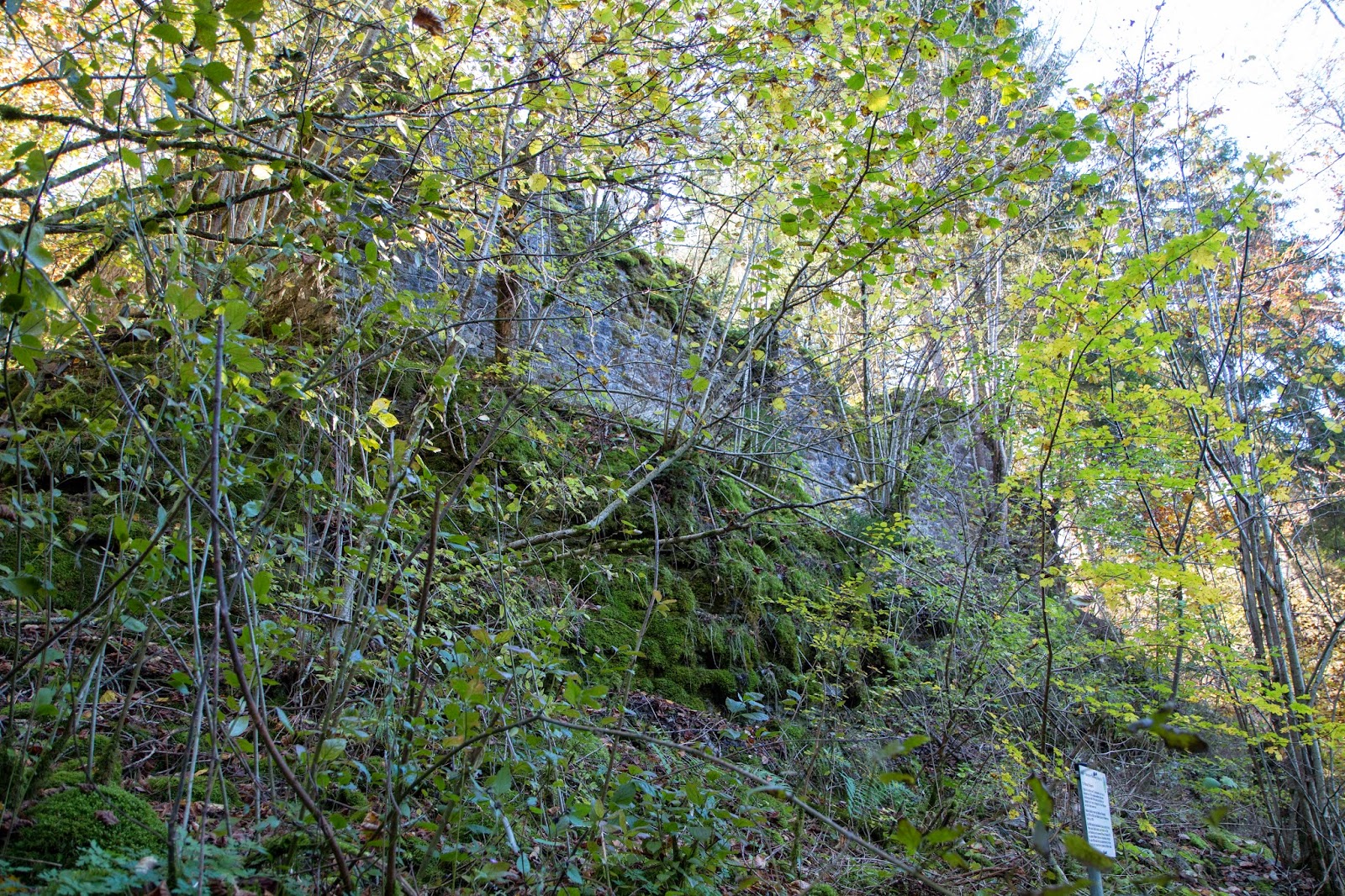 From here we could choose the unadventurous route of going back the way we'd come, which would have been pretty strenuous, too. The damp leaves made the steep slope rather slippery, and going back up the side of a valley sounded less than appealing. So we opted for the flatter dirt road which we were hoping would angle upwards gradually. 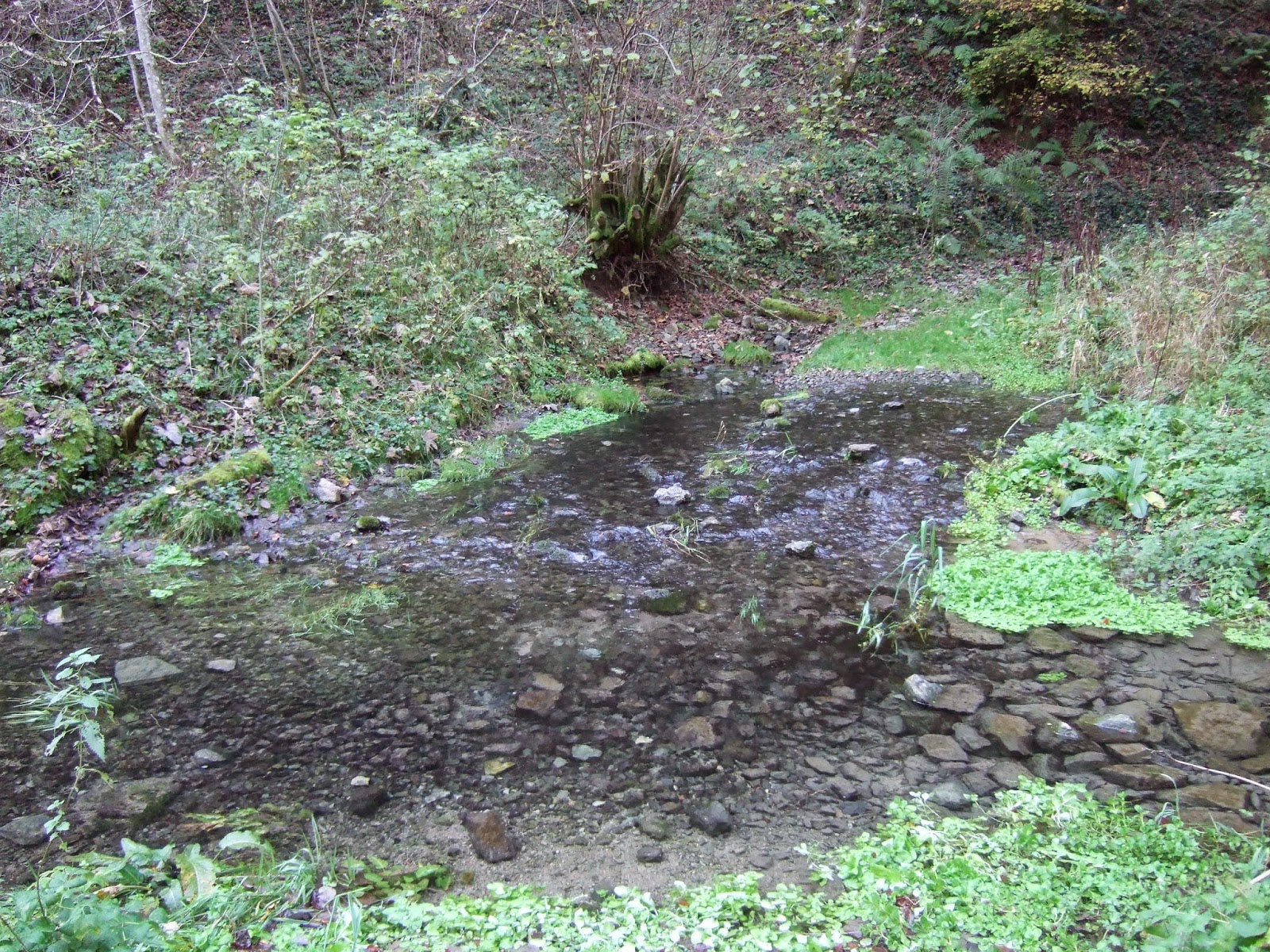 It did not. We got to the level of a stream as we heard one of the trains roar past a few hundred feet above us as the road continued heading downish with an occasional optimistic slope upwards. The picture above shows the springs from which this stream originates. The water is deliciously pure and clear.

At one point I was a little ahead of M and saw something that brought out an "Oh my GOD!" M automatically braced himself to fight a stag or wrestle a rabid wolf while I fled to safety, as I said, "It's a horse!" A woman on a beautiful black steed was trotting along the road on a holiday trail ride. I grinned like an idiot for the next few minutes - that's what horses do to me.

By the time we saw the rooftops of the town on the Neckar east of Horb we realized we'd have to climb up the side of the blasted valley anyway. Good thing we're so fit (yeah, right). We huffed and puffed our way up the hill visualizing the dinner we'd reward ourselves with later.

We keep finding new places for walking/hiking that are right around where we live, and despite the huffing and sweating, we enjoy taking these walks. It's great exercise (even though this walk was only 7 km, it was enough up and down steep hills to burn a few calories), we're out in the fresh air on a beautiful fall day, and we're exploring new sites right in our area. We're surrounded by history and wilderness, and I think that's pretty cool!

We ended the day at our favorite restaurant, and I ordered this as my appetizer:


To savor the dish I made three bites each out of the bite-sized bits of cheese and bacon. I followed that with locally shot Wildschweinrückensteak mit süß-scharfe Pfeffersoße und glasiertes Gemüse, or wild boar in a sweet-spicy pepper sauce and glazed vegetables.

Before we left we reserved a table for Martinstag (11. November), when I'll try goose for the first time! Goose is the traditional German bird to consume on 11. November - more on that in a future post.

It was a really nice way to spend Allerheiligen and my birthday, and a good start to the quiet weekend.

Posted by Ami im Schwabenland at 13:05