Interesting discussions often arise in my weekly English grammar and conversation classes at my husband's company. In this week's class we discussed (of course!) the World Cup, the welcome home celebration in Berlin, the various players and their antics, and the spirit of pride felt around Germany because of our team's victory, evidenced by the enthusiastic display of German flags all over. During the World Cup Germans (and German team fans) fly the flag out their windows, attach flags to their cars, trailers, semis, bikes, and motorcycles, wear team shirts, paint their faces, and put on all kinds of accessories like bracelets, earrings, hats, scarves, wristbands, and t-shirts.

But when the World Cup is over, even this year though the German team won, the flags disappear. The final match was on Sunday, July 13th, and when I went to the local store the next day I thought I could pick up a few extra trinkets with the German flag to keep as gifts or to give to my kids. The display of items that took up a whole corner of the housewares section had disappeared. That's it - World Cup over, German flags gone.* They'll come out again for the European Championship in 2 years.


In the English class we talked about this difference between Germans and their flag and Americans and theirs. One of the guys said he heard from a friend that in the U.S. the flag cannot be just thrown in the trash when it's old, tattered, or no longer needed, and he wondered if that is true. Yep. I went on to explain the parts of the flag code I could remember:


They were quite surprised about those very specific rules, though I explained it's an honor code, not a law. There is another long list of rules for displaying the flag outside or inside and how it should be hoisted, lowered, folded, and stored.

I said that the flag is flown on or at every city, county, state, and national government building in the U.S., at all schools, most public libraries and other public buildings, at many grocery stores, restaurants (Perkins is known for flying a huge flag), businesses and banks, and in many people's yards or on their houses. This is all year 'round, but people really go nuts with the flag for the 4th of July. On that day and during the few weeks before and after it, you can't turn your head anywhere without seeing red, white, and blue. Those who don't display the flag are often seen as unpatriotic.

In our little town there are three tall flagpoles in front of the town hall. The two end ones usually display the Horb flag and the village flag. The middle pole sometimes displays a green flag advertising Horb as a Neckarstadt (city on the Neckar River), and sometimes it's empty. But during the World Cup, the German flag flew on the middle pole.

One of the guys wondered during our class if the flag will remain there now, which in many ways makes sense! It's the town hall, after all - why not fly the national flag as well?

The answer came today in our weekly local newsletter. There was actually a paragraph explaining almost sheepishly to the residents of our village why on earth the German flag is still up. My translation of the notice follows:

During the World Cup the national flag was displayed to show support for our team. On Sunday, July 20th, 2014 is the [70th] anniversary of the July 20th Plot (the attempt to assassinate Hitler), and therefore the displaying of the national flag will be extended until this date.

Clearly, by Monday morning the national flag will be removed from the town hall.

Most Americans will find strange the way Germans handle flag flying, displaying, etc. (and vise versa). All during the welcome home festivities for the national soccer team, Sebastian Schweinsteiger had a German flag draped around his shoulders and tied like a cape, and no one had a problem with it. He even sat on it while he ate a snack.

This following picture appeared on social media before the Germany-Brazil walloping, and most thought it was clever. Anyone doing this to the American flag would have been shouted down by his neighbors, various local organizations, veterans, and the media, and probably the authorities would have gotten involved. 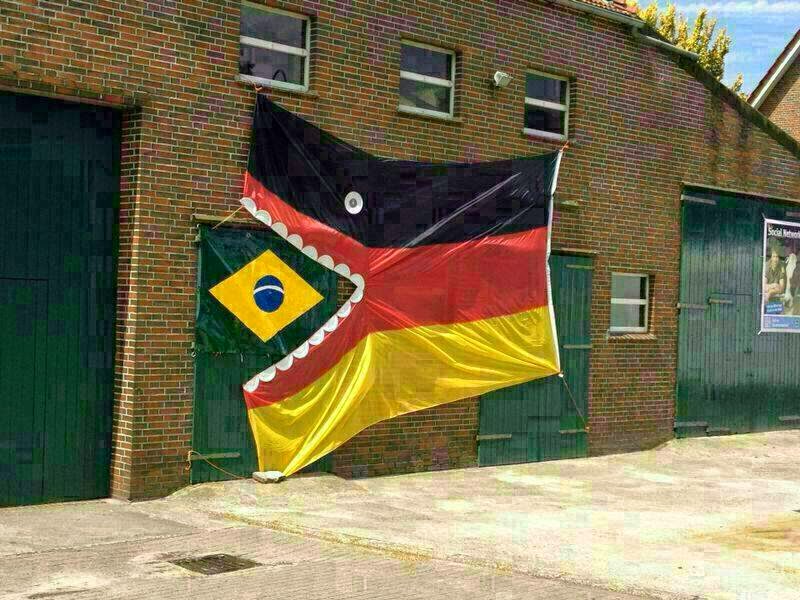 There are no rules that we know of regarding the handling of the German flag, except in military ceremonies. Germans don't salute their flag, they don't have patriotic parades, and private citizens do not generally fly the flag at their homes. We do have two neighbors who do, and the flags are usually tattered from the wind, rain, and hail. The flag is just a symbol here. It's not treated like an idol or a relic, but I've also never heard of it being burned by German citizens in protest of something. In fact I just read that burning or attempting to burn the German national flag is a punishable offense, unlike in the U.S. where that odd act is protected under the freedom of speech.

I don't mean to imply with this post that either the German way or the American way of handling the national flag is better - simply that it's different. If a German visits the U.S. and mishandles the flag, it's not out of disrespect but rather because Germans don't have the same flag code that Americans do. An American visiting Germany should not assume that Germans disrespect their country because they don't treat their flag with reverence.

*You will always be able to find trinkets, mugs, beer glasses, t-shirts, keychains, etc. with the German flag on them in cities and towns that are popular with tourists, such as Berlin, Munich, Heidelberg, Rothenburg o.d.Tauber, and Rüdesheim am Rhein.
Posted by Ami im Schwabenland at 14:05