'Tis the season for Weihnachtsmärkte, Glühwein, Adventskalender, and heiße Maroni in Germany, and I love it! It's next to impossible not to get filled with the Christmas spirit in Germany during Advent. I have discovered there is more to Christmas than shopping in crowded stores, enduring Santa songs on the radio, and stress, though admittedly it's easier to see that when one is semi-retired.

One German Advent tradition or ritual is the Adventskranz. We bought ours last weekend at the Horb Christmas market. It's important to buy it before the first Sunday of Advent, though Martin found out two years ago that if one waits until the Monday after, they are a lot cheaper... As far as I know, in the U.S. the lighting of the Advent wreath is only done in churches, where every Sunday another candle is lit. Here most families have one somewhere in their home.

The Adventskalender is quite popular here, too. Our grocery store was exploding with Adventskalender (especially the ones with a piece of chocolate behind every door) in the last days of November, and again, on about the 2nd or 3rd of  December, they can be purchased at a reduced price (but seriously, suck it up and buy it on time). Something is missing if a home doesn't have at least one Adventskalender - one per child, in homes with children.

The wooden Weihnachtspyramide is a favorite decoration, the best of them being made in the Erzgebirge region. They come in all sizes and colors, and when the candles are lit, the poor little Holy Family gets spun around to the point that, if they were real, they'd be wretching for sure. It's best not to think about that too much and just enjoy the action.


My favorite part of this season is Weihnachtsmärkte, or Christmas markets. I can't get enough of them. I've been to three so far this season, and I'll be going to five more between now and Dec. 23. The best one in these parts is unquestionably the one in Esslingen with its traditional section and the Mittelalterlichen Weihnachtsmarkt. Two-hour long TV programs have been produced about the Esslingen Christmas market, and rightly so. It's truly something to behold.

At the Weihnachtsmärkte you will see lots of festively decorated booths selling all kinds of wares - candle holders, hand-carved wooden ornaments and decorations, warm woolen mittens, hats, and scarves, jewelry, and snow globes for starters. No one should leave a Weihnachtsmarkt hungry, because the amount of food to be had could feed several armies. Crepes, rote Wurst, roasted nuts, Lebkuchenherzen (heart-shaped gingerbread), Waffeln, Bratwurst, Flammkuchen, and Bratkartoffeln or Reibekuchen, are just a few of the delictable snacks you can expect to find.

Glühwein is hot spiced mulled red wine, which warms the soul on cold afternoons and evenings at a Weihnachtsmarkt. This has always been a delicious tradition for me that goes with Weihnachtsmärkte, but this year I discovered that I actually don't love it. Kinderpunsch is the non-alcoholic version, and perhaps I'll try that this season. When you buy Glühwein for €2,50 or so, you pay €4,50, because €2 is deposit on the mug. You can keep the mug, which is a pretty inexpensive souvenir, or return it and get your €2 back. Locals usually return the mug because they already have a cupboardful from the last twenty-some years. 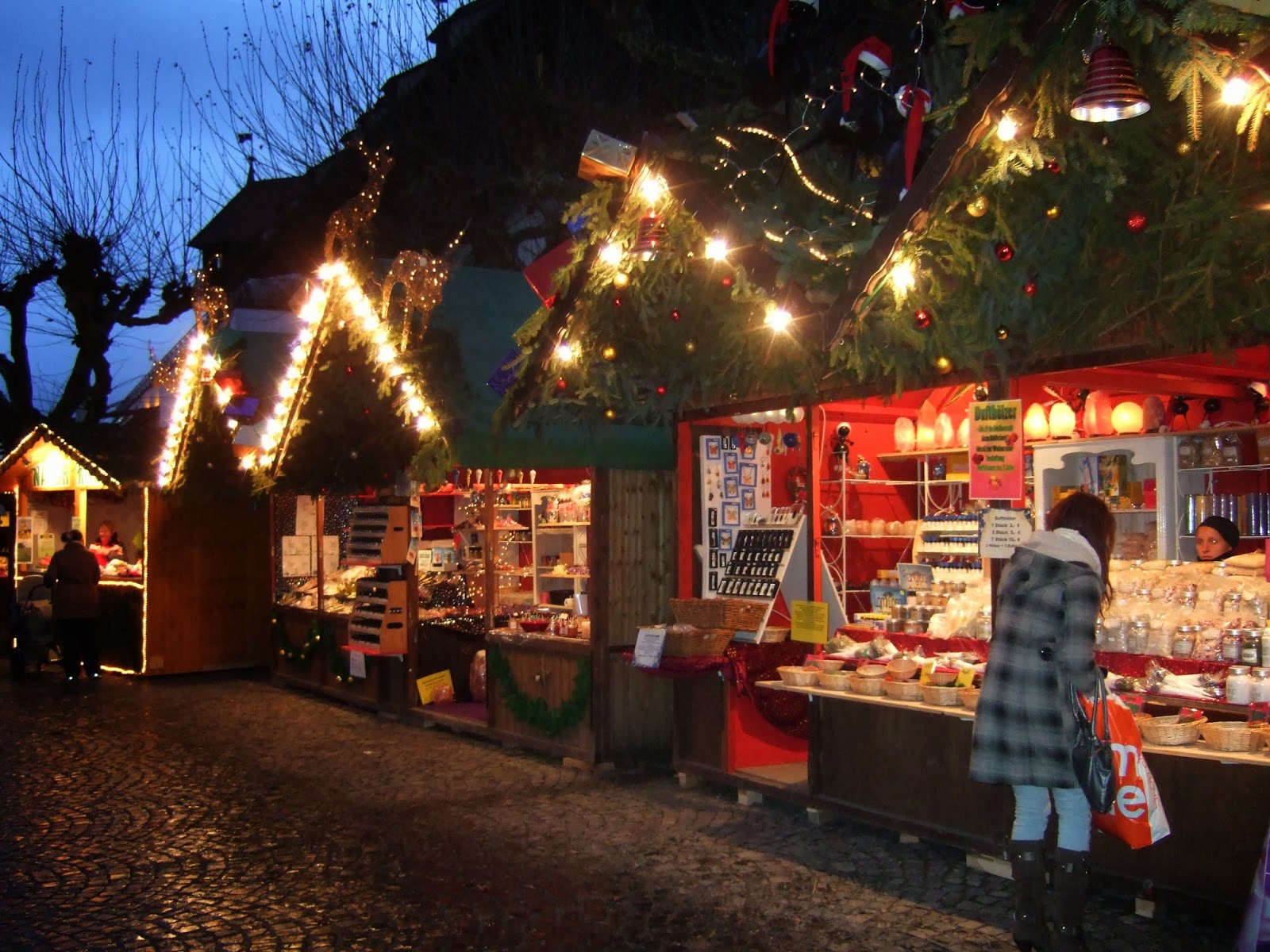 In the evenings the Weihnachtsmärkte take on a new atmosphere as the sky darkens and the lights add a romantic aura to the scene. This is the Weihnachtsmarkt in Konstanz on the Bodensee (Lake Constance).

Some of the smaller Christmas markets, like the one in Horb, are open just for a weekend. Those appeal mainly to the locals, as it's a nice place to meet friends at the Feuerzangenbowle, hear the local youth entertain with singing and playing instruments, and support local venders. The bigger, more well-known ones are open every day from the end of November until shortly before Christmas.

The markets are outside without shelter. If it's raining, which it often is in December in Germany, you have to dodge umbrellas and make sure you don't impale anyone with yours. If it's snowing and blowing, you better bundle up. Other than the recent hurricane that blew through northern Germany, weather doesn't stop Weihnachtsmärkte or people from visiting them.

I have loved the Advent and Christmas season in Germany ever since my first December trip here. I hope the wonder of the season doesn't fade for me over the years, and it shouldn't. The things that sometimes ate away at my Christmas cheer in Wisconsin - driving on snowy, icy roads, shoveling multi-feet of snow before driving to school or after returning, having to prepare lessons and grade homework, and shopping in over-crowded stores due to holiday sales - just aren't issues for me any more. There is just something special about the old world holiday traditions here that I wish all of my American friends could experience.