Despite the fact that modern German kitchen designers have all but done away with double sinks making me wonder if they have ever spent any time actually using a kitchen, in other areas of home and furniture design, the Germans have stumbled upon brilliance. One such masterpiece is the German double bed. It's such a simple idea, really, and probably something most Germans take for granted unless they've traveled to the U.K. or the U.S. for several overnights. Perhaps double beds are like the American and British style everywhere else in the world as well - I really don't know. I just know that the German bed designers really nailed it. 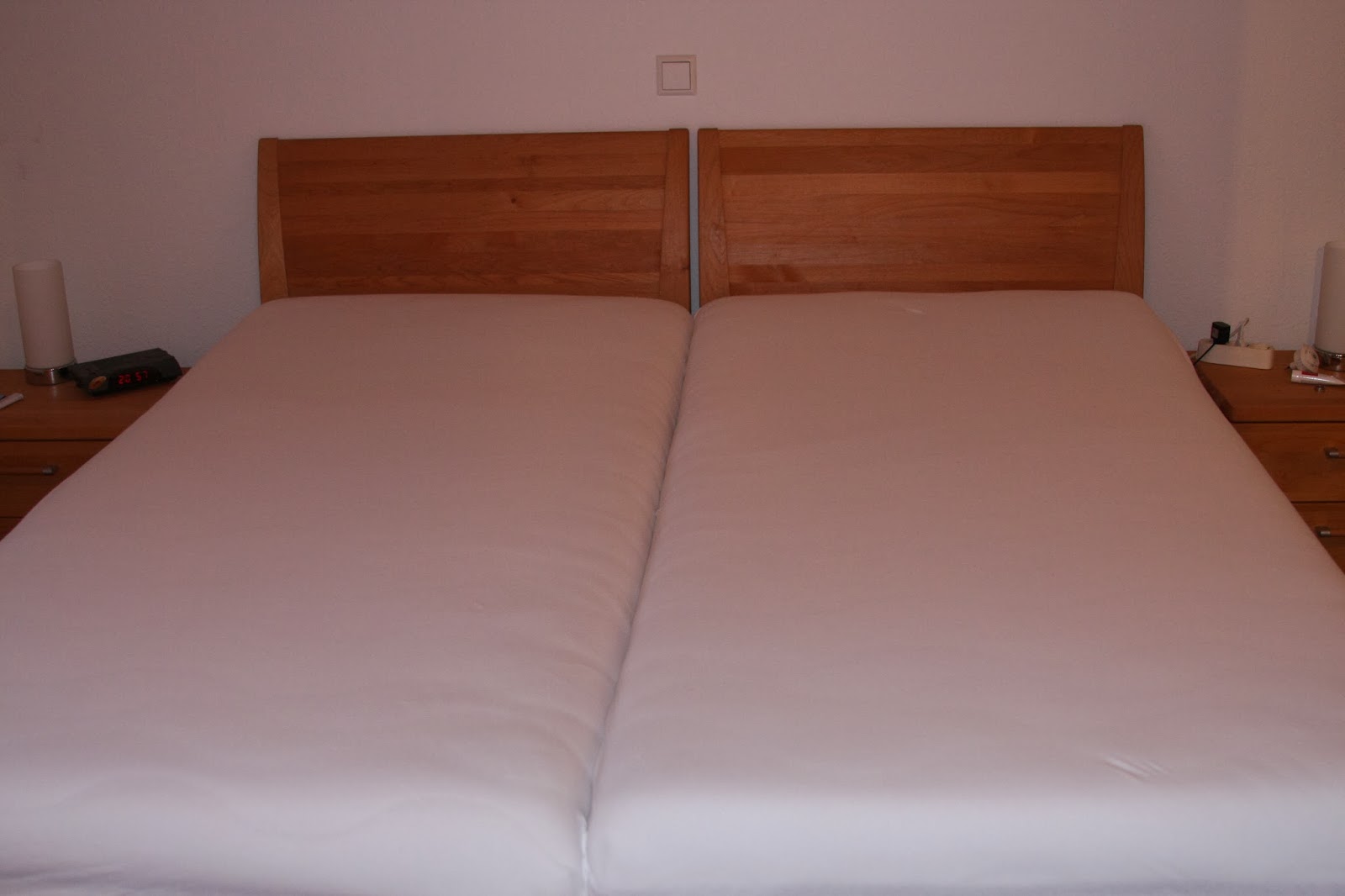 Even though our head board is split, the bed frame is one piece. There are two mattresses, and I assume they are both single-bed size. The fitted sheets go over each mattress, and so if one's wife is off traveling in America for several weeks, he can wash his own sheet without having to strip the entire bed. There are no flat sheets to tuck in, which makes making the bed a breeze. 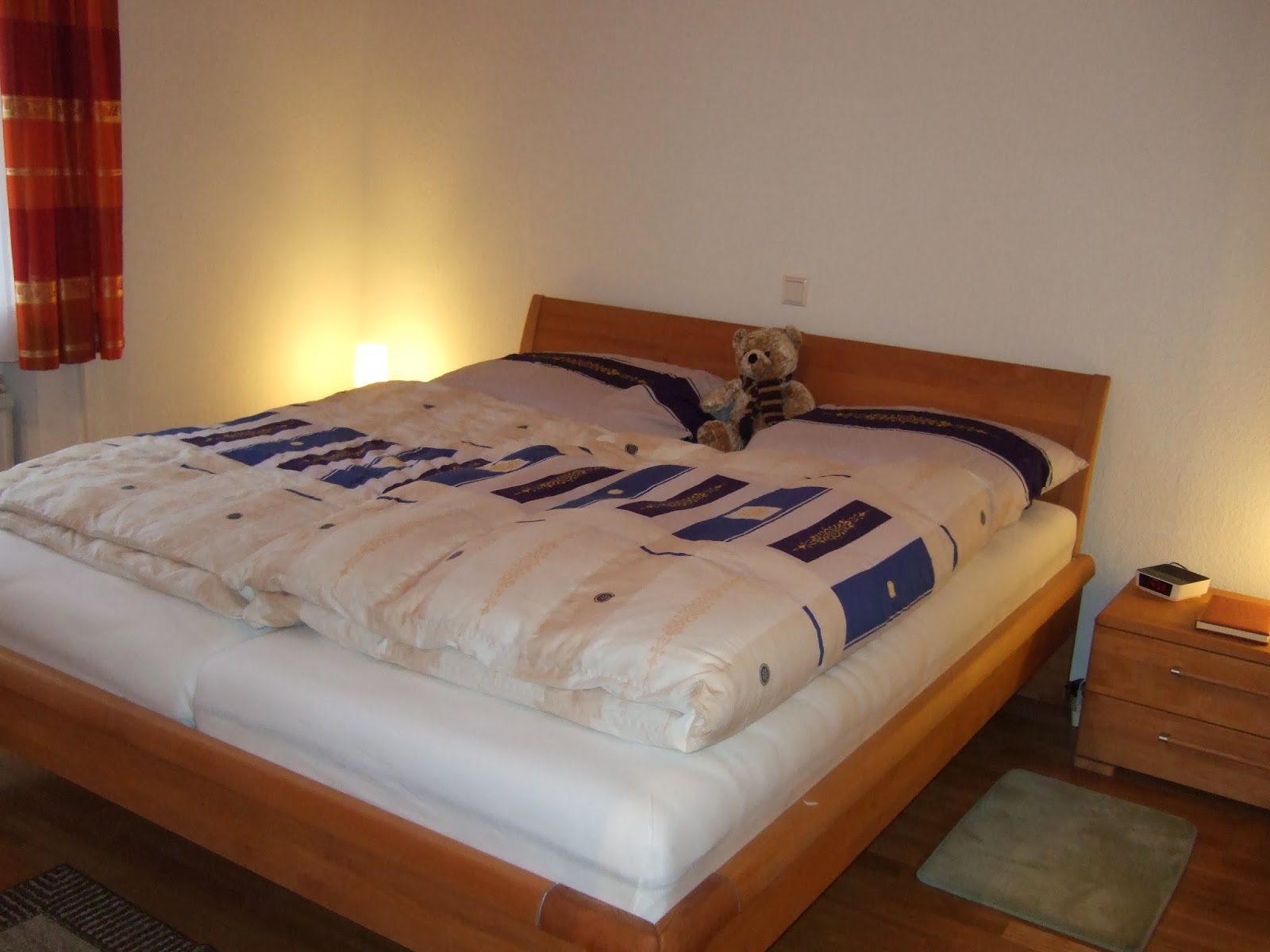 The covers are Federbetten (feather beds), which the Brits call duvets. When it's time to wash the sheets, the duvet cover - which is like a pocket or sleeve which closes on the one end with buttons or a zipper - is removed and washed. To make the bed, I fluff up the Federbett, fold it in half, lay it on the mattress, and I'm finished. No retucking, no folding down of the flat sheet, no straightening of the sheet because it's touching the floor on one side and hardly covering the mattress on the other... (all those devilish annoyances that make children grumble about having to make their beds in the morning).

And here's another brilliant thing: M is almost always warm. He sleeps with his window open and the heat in the bedroom off all winter long.  (Germans like and need as much fresh air as they can get, no matter how cold it is.) That's one reason why he likes not having the flat sheet we had on the bed in Wisconsin - if there's no flat sheet trapping his feet, then when it gets warm at night he can just stick a leg out. I, on the other hand, am almost always cold. As I sit here in the office typing this, I'm considering getting my winter slippers because my feet are starting to go numb despite the fact that it is not cold in here!  Is it time to bring out the winter blanket? I'd say yes, but not for M. So this is how couples living in Germany solve that little issue: 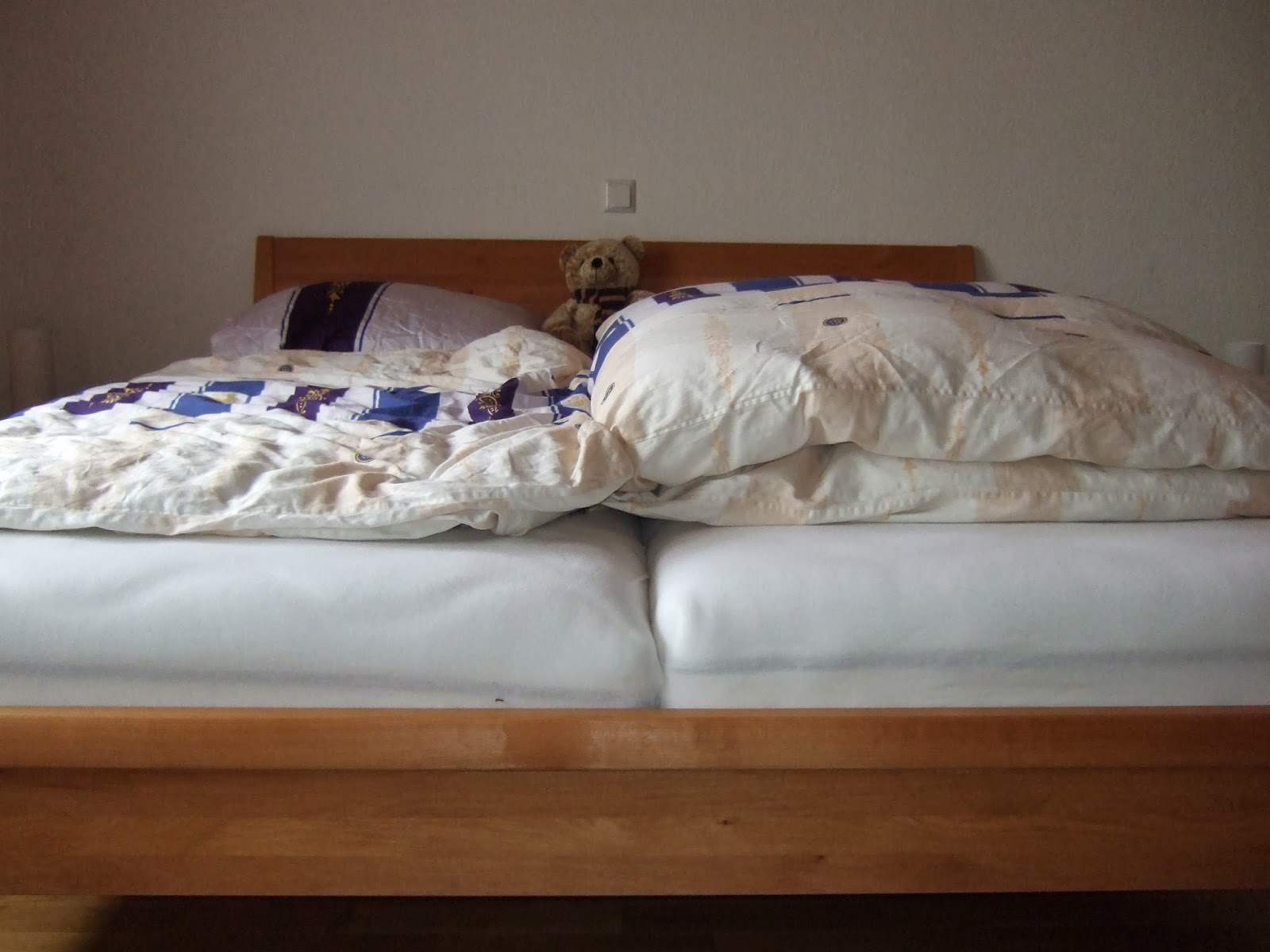 Guess which side I sleep on?


It's perfect - he can go on using his summer blanket until January when it actually gets cold, and I can use my "Wolke 7" ("Cloud 9") blanket from now until May. Everybody's happy.

One other marital issue that is solved by this bed design is something men must grumble about a lot, judging from cartoons and comedians' jokes - the wife stealing the blanket (which I've surely never done). This way, she has her own! She can wrap up and snuggle in to her heart's content, and he doesn't have to worry about waking up shivering because she is hoarding the warmth. I recently saw a cartoon of a couple lying in bed, and the husband had nailed his side of the blanket to the floor on his side of the bed. We don't have to resort to such measures here in Germany!

Now if only the bed designing team could help out the guys designing kitchen sinks...!
Posted by Ami im Schwabenland at 12:49