Only in the last year or two have I learned to enjoy cooking. In the past was rarely willing to experiment or take a risk, so I always ended up making the same old recipes, following them exactly as written. A little more than a year ago, my best friend and I started cooking together and trying new recipes from magazines or Pinterest. I learned how easy it is to roast a whole chicken in the oven or the slow cooker, and we got good at stretching leftovers into new meals.

I would have thought that my favorite recipes from "back home" would be easy to make here in Germany, but I found that not to be the case. Things taste different here. It seems there is less sugar and less fat in most foods. Someone recently told me that the difference starts with the water, which is such a basic ingredient that of course everything has a different taste. I tried to bake chocolate chip cookies shortly after I arrived but failed badly. The chocolate chips I found came in tiny packages and were not at all right.

What is considered a staple in the U.S. is not neccesarily available here. I have a cookbook from Campbells in which almost every recipe calls for a condensed soup. Normal soup here is not condensed. I imagine I could work around that by not adding additional liquid, but I haven't experimented yet. I can't find cilantro or Monterey Jack cheese, peanut butter is rare and overpriced, and there is no cooking spray. Forget about flavored coffee creamer (Germans prefer their coffee to taste like coffee), string cheese, and bagels.  Beef is rather expensive, and I still haven't figured out what to ask for when I want a certain cut of beef that was readily available in the pre-packed meat section at Pick-n-Save, such as top round steak, chuck roast, or sirloin.

Breadcrumbs are much finer here, the butter is unsalted, sour cream comes in containers smaller than yogurt cups, there's only one kind of cheddar cheese (and that's found in the special gourmet cheese section), and as I've written before, the chickens are tiny.

On the flip side, in Germany there are many different kinds of mushrooms (and Germans have entire magazines and cookbooks devoted to Pfifferlinge (chanterelles), one can buy large containers of Butterschmalz (ghee, or clarified butter), shallots and chives cost a fraction of what they do in Wisconsin, bread and rolls are crusty on the outside and deliciously moist on the inside, there are more sorts of sausages than I ever thought existed, and Schwarzwälder Schinken (which is more like Prosciutto than what is called "Blackforest ham" in Wisconsin) is always available, not expensive, and delicious on sandwiches.

While I was at my parents' in Wisconsin earlier this month, my mom and I made a casserole I discovered here. It turned out just fine, but I had run into a problem in the produce section when we went shopping. The recipe calls for "festkochende Kartoffeln," which apparently means "waxy potatoes." I never was very familiar with potato sorts (what's the difference between Russet and Yukon Gold beyond the color??),  but here I know that if I'm making baked potatoes I need "festkochende" and if I'm making mashed potatoes I need "mehlig kochende." At Pick-n-Save the same bag of potatoes says they're great for baked or mashed potatoes.  Huh??

Although I miss my Carnation chocolate malt powder - which I used to get a glass of milk down - German bread more than makes up for its absence in my life.  While I had to give up string cheese as a usual snack, the yogurt here is creamier and less sweet than American yogurt. And despite my issues with cuts of beef, I'm getting good with pork. Schweinehals ("pig neck" - though I think we'd call it "pork shoulder blade roast" in the U.S.) makes a delicious roast, and I only have to ask for five Schweineschnitzel ("pork cutlets") for the butcher to know exactly what I want to make what Americans would call Wiener Schnitzel.

So I am learning to appreciate the foods available wherever I am, rather than lamenting the absence of something I can't get. Except for chocolate chips. My parents brought me a 72-ounce bag of chocolate chips at Christmastime, because there's just no substitute for home-baked Nestle Tollhouse cookies! 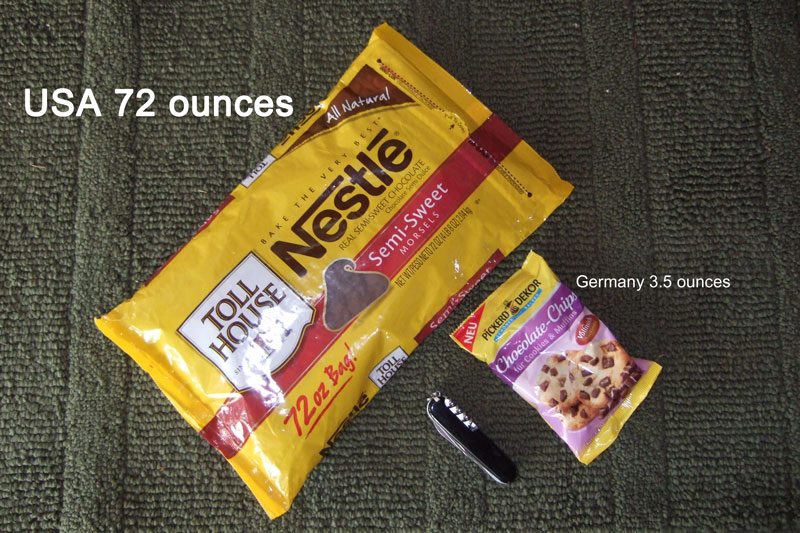 Posted by Ami im Schwabenland at 13:26