There are many things the Germans do that make a lot of sense. If I'd point out how logical some of their habits are, I might expect the response "Why would one do it any other way?" That's one of the Three Pillars of German Engineering told to me by an American friend who works for a German company near Esslingen, and I haven't met a German yet with whom I've shared that who disagreed!

One important German value is Order. "Ordnung muss sein" (There must be order) is all but a law over here. Why would one NOT want order in his or her life? In some ways order is forced upon us here in Germany, but no one minds much.

At grocery stores, for instance, there is no employee sent out to collect carts every 30 minutes, and there are no carts scattered around the parking lot left by lazy shoppers or drifting unmanned with the wind across the lot until its journey is stopped by a parked car. All the unused (pre-used?) shopping carts are nestled together in the parking lot at various locations parked in semi-sheltered sheds, awaiting the next shoppers.  How do German stores manage this?

They require a deposit for using a shopping cart.  In order to obtain a cart for your purchases, you go from your car straight to the shed where the carts are chained together, insert a Euro coin into the slot which releases the chain, and you push your cart into the store.  After you have made your purchases and unloaded them from the cart into your car, you push the cart back to the shed, plug the chain from the already parked cart into your cart, remove your Euro, and go on your merry way.

What if you forgot to bring a Euro with you?  Then you'll have to hope that what you need to buy will fit in the little baskets that are available for you inside the store (no deposit required). You probably won't forget your coin more than once, after which you'll always leave it in the cup holder of your car. 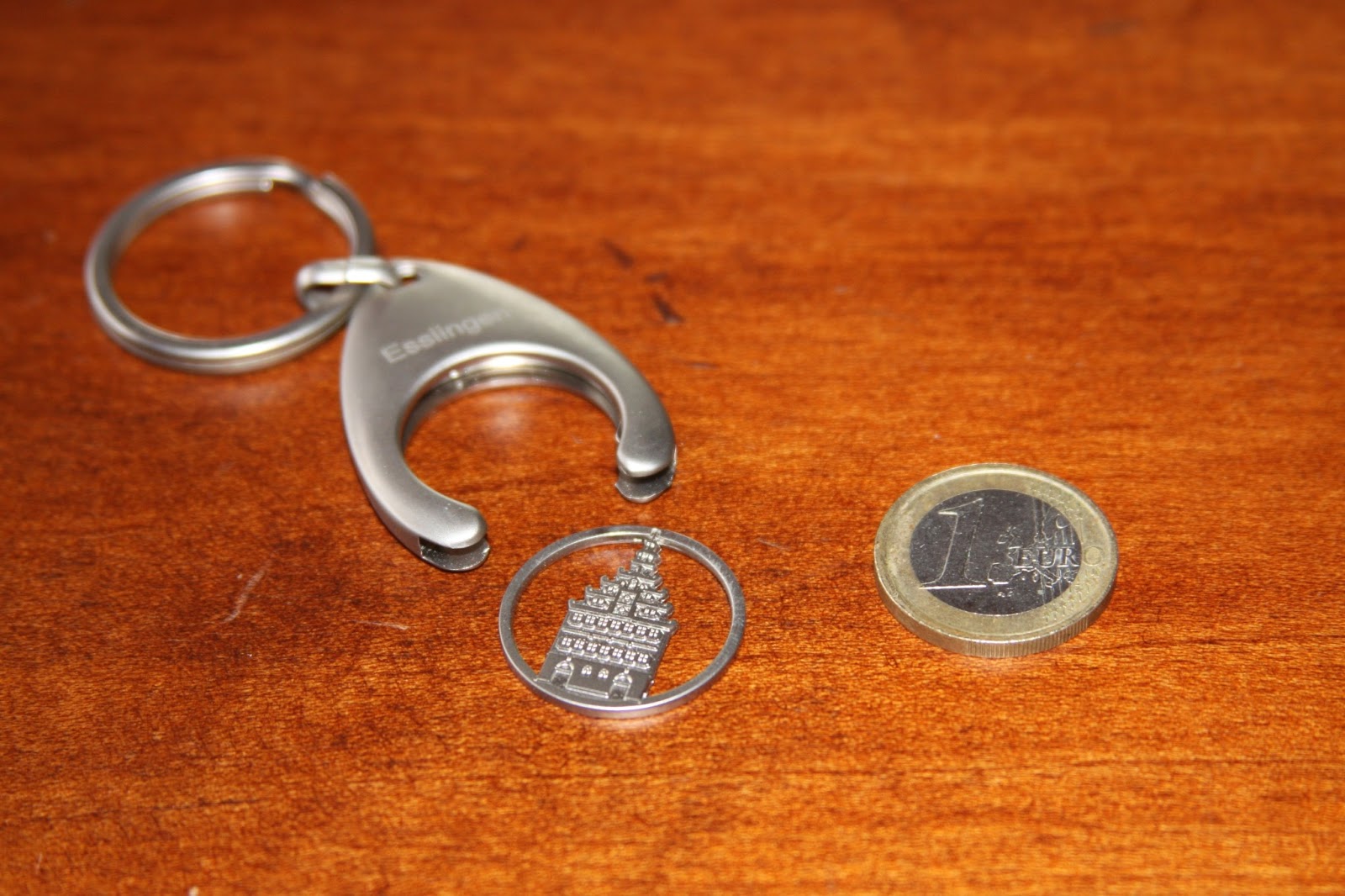 You can also find keychains nowadays that have a little insert the size of a Euro coin, which the carts accept. I have found this little device quite handy.

Another cost- and labor-saving procedure here concerns the bagging of groceries. The stores do not hire baggers. Customers bag their own groceries. No one asks "Paper or plastic?", because the bags aren't free. If you forgot your own canvas bags, you purchase large, sturdy plastic bags at the checkout for 10 cents each. Savy, frugal shoppers will always bring their own bags, of course. ("Why would you do it any other way?")

So shoppers put their groceries on the conveyer belt, the cashier scans them, and the shopper grabs the items and tosses them back into the cart. There's time to bag them up later (at your car, in the sunshine, rain, or snow), so don't hold others up by bagging at the checkout.

Lastly, in the produce section, shoppers weigh their own selections on a scale that also prints out a scannable sticker, which the shopper sticks to the little plastic bag into which he puts the fruit or veggies. If you forget to do this, there is a scale not too far from the checkout to which the cashier will send you. That happened to me. Once. The scowls of the shoppers behind me were enough to deter a repeat offense.

Germans must be fascinated by grocery shopping in the U.S. At least in Wisconsin, someone bagged my groceries into bags I didn't have to pay for without expecting a tip. The cashier weighed my fruits and veggies. And carts, though there were several corrals to which shoppers were asked to return them, were often scattered willy-nilly around the parking lot.  A Swabian would shake his head while thinking, "If they had to plug a dollar into the cart to use it, they would never leave it in the middle of the lot in such a disorderly fashion!  Ordnung muss sein!"
Posted by Ami im Schwabenland at 15:27